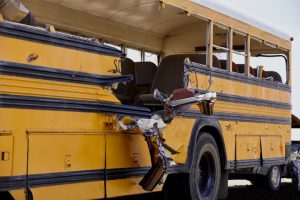 Bus transportation is an important and inexpensive mode of commuting and traveling for millions of people. Buses help minimize traffic congestion and are able to take large groups to work, sporting and entertainment events. Bus accidents are not as common as other motor vehicle crashes but often lead to numerous victims when crashes do occur.

Standard of Care for Buses

Buses are commercial vehicles since they transport persons and property for a fee. They are regulated by state and federal laws including the Federal Motor Carrier Safety Administration (FMCA), which has rules regarding working hours, drug testing, inspections, record keeping and safety. Bus drivers and companies are held to a higher standard of care than ordinary motorists and are carefully scrutinized in an accident to determine if a state or federal regulation has been violated.

There are different types of buses, including:

Because of their size, buses lack the maneuverability of smaller vehicles. Training is required for bus drivers who must also pass drug tests and not have medical conditions that could pose a risk to passengers and other motorists.

Most older buses do not have seat belts nor do city buses. Buses used for transporting children and school athletes generally do but many only have lap belts. It is well-documented that 3-point seat belts offer greater protection especially in severe crashes where occupants are ejected, a not uncommon occurrence in a severe bus accident. The National Highway Traffic Safety Administration (NHTSA) reports that you are 13 times more likely to suffer a serious injury when ejected from a vehicle. NHTSA statistics also show that 47% of persons killed in rollover accidents were ejected, suggesting that these individuals were either not in seat restraints or 3-point restraints.

In a 2014 bus accident in Texas, three student athletes were killed when their bus buckled after being sideswiped by an apparently impaired truck driver. Two of the students were fully ejected from the bus and the third was partially ejected. The bus only had lap belts. The primary focus of the litigation was on the structural integrity of the bus, which failed to meet minimal standards for joint strength. Other alleged defects concerned shortcuts in constructing the bus body panels and in tests demonstrating that the steel tubing used was significantly weaker than industry standards. Missing weld and other poor construction techniques had allegedly caused the bus to fail to withstand the impact.

In another 2014 accident involving a school bus in Anaheim, California, the driver passed out at the wheel before crashing it. Five children suffered serious injuries including one who sustained a traumatic brain injury. An investigation of the driver revealed that he had a medical condition called pulmonary hypertension that compromised his heart and lungs, apparently increasing his risk of losing consciousness. Despite earlier warnings to the school district about the driver having acted erratically in the months before the accident, the district failed to investigate beyond administering a blood test. The district reached a settlement with the families for $10 million.

Other Causes of Bus Accidents

Bus accidents are often caused by driver negligence. Factors leading to accidents include:

As in the Texas bus tragedy cited above, equipment defects and structural failures can lead to serious or fatal consequences that could otherwise have been avoided. Failing to install seatbelts or having 3-point restraints when transporting students or during charter or interstate travel is a major factor leading to deaths and catastrophic injuries for numerous victims.

Litigating a bus accident is complex since your personal injury lawyer requires experience and the knowledge regarding bus company and driver rules and regulations. When handling numerous injury claims from a bus accident, your bus accident injury lawyer must be careful to treat each claim separately and equally, though some injuries will likely be more serious than others. Of course, liability is a major issue and there may be more than one responsible party.

As commercial carriers, bus companies will possess commercial liability coverage of at least $5 million in most instances. If suing a school district, the limits may vary and in Massachusetts may be limited to the $100,000 cap imposed by law. Your personal injury buss accident lawyer will need to determine each claimant’s individual economic damages as well as how their injuries have affected their daily lives and opportunities in the future. Records for each claimant include medical, school, employment and forecasts about the future for each claimant based on medical statements, vocational and forensic economic reports, if applicable.

Once determined, your lawyer will discuss with you about how to approach settlement discussions and the possible division of what is available in coverage from the bus company and any other entity who is liable to some extent for the accident.

Damages in a Bus Accident Claim

Damages in a bus accident injury claim typically include:

If fatal injuries occurred, then the administrator of the decedent’s estate may bring a claim on behalf of the immediate family for:

Punitive or exemplary damages are only available in Massachusetts death cases if the responsible party acted with gross negligence or exhibited willful indifference to the safety of others. Cases where a party deliberately used inferior materials, falsified records or test results or otherwise acted in total disregard for maintaining the safety of a vehicle or product are ones where punitive damages may be awarded.

Neil Burns is a bus accident injury lawyer who has been representing the claims of injured bus and other motor vehicle accident victims in Boston and throughout the state for over 30-years. Call his office to discuss your bus accident claim.