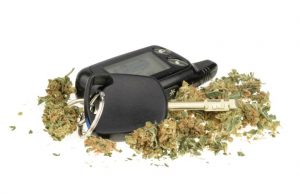 One of the controversies over its legalization is how it affects driving behavior. While marijuana use may be legal in Massachusetts, it is not legal to drive while impaired or under the influence of a drug (OUI). All states have laws making it unlawful to drive under the influence of alcohol or to engage in drugged driving. A blood or urine sample can detect the presence of certain drugs if specifically tested for that drug. Also, police officers trained in drug recognition can detect symptoms of drug use in drivers that can provide probable cause to test the motorists for the presence of drugs in their blood system.

Unlike alcohol, however, where it is unlawful to drive a motor vehicle with a blood alcohol level of 0.08%, there is no reliable measurable level of THC, for example, where a person can be presumed to be driving high and thus impaired. Also, THC can remain in a person’s blood for days or weeks, long after the effects have worn off.

One of the issues surrounding a motorist’s arrest for OUI for marijuana use is whether it truly impairs the driver. Some studies suggest drivers who have ingested marijuana are not nearly as impaired as intoxicated motorists with researchers pointing out that users are more careful, less inclined to make poor judgments or take risks and can compensate quickly if they begin to weave. Drivers who ingested or smoked marijuana also tend to driver slower, follow cars at a greater distance and are more aware of their altered state. This is not true for drivers who are very stoned, however.

Other commentators and researchers, however, claim that marijuana users become disoriented and have a distorted sense of time, space and depth as well as feelings of paranoia, all of which can lead to dangerous driving conduct.

If you were injured in an accident and suspected the other motorist of drugged driving or being under the influence of marijuana, it may or may not affect how your claim is handled or how you are compensated. In Massachusetts, you cannot claim punitive damages in a personal injury matter unless it is a wrongful death claim, and even then, only under specific circumstances. You also have to show that the driver was grossly negligent or exhibited a willful indifference to the rights and safety of others by ingesting marijuana before driving.

If a loved one did succumb due to the negligent driving of another motorist whom is suspected of marijuana use, you can show that the driver had at least recently smoked or ingested the drug by the following:

Police are able to seize contraband in a vehicle if it was legally stopped and they had probable cause to believe the driver was driving high or under the influence. They cannot do a wholesale search of the vehicle, however. Contraband such as marijuana cigarettes and food containing THC or marijuana may be seized if in plain view, regardless if the driver purchased it legally so long as the motorist is suspected of driving high.

This issue was recently brought in the horrifying case of a Webster, Massachusetts man accused of vehicular homicide and being under the influence of marijuana. He had rear-ended a state trooper’s vehicle at 80 miles per hour, killing the trooper. Medical personnel smelled marijuana on the man when treating him for injuries shortly after the accident. In his car were tubes of recently purchased marijuana from a medical dispensary that were missing some of its contents. A toxicology test indicated the presence of THC in the driver.. His lawyer has asked that the under the influence charges be dropped since the defendant did not admit to having ingested the drug that day and because the drug test cannot reliably pinpoint how long the THC had been in his blood. It was not clear if the man was in legal possession of the medical marijuana.

Massachusetts law does not consider a certain level of THC in the body unlawful when driving. Washington, however, does set the level at 5 micrograms per liter. A problem with this is that researchers have found that impairment in drivers only becomes apparent at 13 micrograms per liter so that the Washington level is well below that of what could be considered impaired.

Damages in a OUI Injury Accident

If you were injured in an accident with a driver who was under the influence, your damages will not necessarily be affected because the driver was high on marijuana or any other drug. It could influence liability if it is liability is disputed since evidence of a motorist having recently smoked or ingested the drug could sway an insurer or jury to find negligence.

Damages in an injury claim may include:

If a wrongful death claim, this is brought by the administrator for the decedent’s estate on behalf of the immediate family members only. Damages may include:

In any injury or wrongful death claim, retain the services of Neil Burns, a Boston personal injury lawyer who has represented thousands of injured persons throughout the Commonwealth of Massachusetts in his over 30 years of practice.  Call today to get started: 617-227-7423.