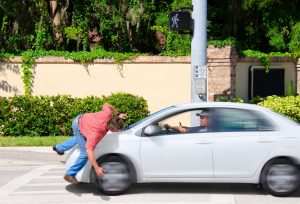 Being injured in a car accident is bad enough, but the trauma is compounded when the culpable driver flees the scene. Not only is the driver attempting to elude responsibility but you may find yourself having to pay the costs associated with your injury and car damage if you were not adequately covered by insurance.

In a recent fatal hit and run accident in Taunton, a 19-year old driver struck a bicyclist but continued to drive down the road with the bicycle and victim caught in the undercarriage. Her boyfriend, a passenger in the vehicle, yelled at the driver to stop and then removed the bicycle, throwing it into nearby woods before telling the driver to flee the scene without attending to  the victim who later died.

Fortunately, in this case, the driver was located and brought to justice. But in far too many cases, the hit and run driver escapes authorities and the victim and victim’s family is left without justice having been served or without adequate compensation for medical expenses, lost earnings and facing the prospect of a life with a disability.

The first step in any accident scenario is to be prepared by having adequate insurance coverage. A hit and run accident is treated as an uninsured motorist claim if the driver is not found or if the driver lacked liability coverage at all. You need uninsured (UM) and underinsured (UIM) coverage in an amount that can approach reasonable compensation for you depending on the nature and extent of your injuries. Uninsured property damage coverage is also needed.

Minimum insurance requirements for vehicles in Massachusetts are very low, at $20,000/$40,000. Minimum UM coverage is compulsory in Massachusetts but only at these levels as well, meaning that if you are injured by an uninsured driver, you can recover only $20,000 for yourself. If more than one person was injured in that same accident, your policy only provides $40,000 for all victims with no more than $20,000 for any person.

Considering the cost of an ambulance, diagnostic tests, emergency treatment and an overnight stay in a hospital, your medical expenses alone can easily approach $20,000 before you begin comprehensive treatment. For more serious injuries, medical and lost earnings over several months can be several times this amount.  Based on our experience, we recommend coverage of at the very least $100,000 in UM and UIM coverage as a safety net against a hit and run incident.

Steps to Take in a Hit and Run Accident

If you are a victim of a hit and run accident, there are some things you can do to protect your claim and to possibly locate the responsible driver after you call 911:

What your Hit and Run Lawyer Can Do

Should you have been incapacitated at the accident scene or were unable to obtain much information at the scene, your hit and run lawyer can be instrumental in how your claim is handled and in the compensation you are entitled to receive.

A police report by the investigating officer can certainly provide you with essential information about the scene and if there were witnesses to the accident. At least verifying that an accident did occur and that you suffered injuries should be sufficient to get your claim started.

If the driver has not been found, your lawyer could find out if surveillance videos from the intersection or adjoining businesses may have captured the accident on film. This must be done quickly since the film is not preserved for very long.

If there were witnesses but their statements were vague, then an investigator from your lawyer’s office can contact them to carefully review their observations. The investigator can also visit the scene and review how the accident occurred, especially if an insurance company is denying coverage or is disputing liability.

If the driver is not found or the driver lacked liability coverage, then your own UM policy can be the source of compensation. In this case, your insurer can be your adversary since your interests and theirs are not the same. Further, like any other injury claim, you have the burden of proving the uninsured driver was negligent in causing the accident and your injuries. Leaving the scene may be some indicia of guilt but some drivers may claim they were unaware an accident occurred or that they were negligent at all. Your attorney is the one who can prove liability as well as substantiate your claimed damages.

UM cases, if not settled, are arbitrated instead of going to court. Arbitrations are mini-trials but are held before a single person in most cases, who is usually a disinterested lawyer or retired judge. Because the rules of evidence are followed generally, you will need legal representation to present and argue your case.

Damages in a Hit and Run Injury Case

Your damages in a uninsured motorist case are limited to the policy amounts, which may be a minimum of $20,000 up to whatever you chose to have. If the driver was located and was insured, then you can obtain up to the driver’s policy limits and then explore additional compensation if you had UIM coverage that was over and above the responsible driver’s limits. For instance, if the driver had $20,000 in coverage and your UIM policy was $100,000, you could recover up to $80,000 under your own policy after exhausting the culpable driver’s limits.

In some cases, your attorney might want to determine if the responsible driver had assets that are subject to collection if a judgment is obtained, but this is an issue your hit and run driver should discuss with you.

In fatal hit and run accidents like the one in Taunton, then Massachusetts has a system whereby the administrator of the decedent’s estate can bring a wrongful death action on behalf of the decedent’s immediate family members. Damages may include:

Fleeing the scene of an accident, especially where the defendant attempted to cover up the accident by getting rid of the bicycle that the decedent had been riding, may be enough to warrant punitive damages.

Contact hit and run lawyer Neil Burns of Boston if you or a loved one was injured or killed in a hit and run accident.