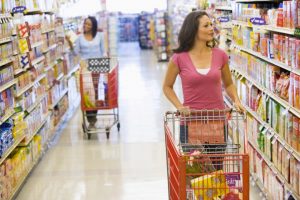 All of us shop at supermarkets or have at one time or another. These stores have a high duty or care to shoppers and must ensure that aisles are clean and free of debris or slippery substances, that objects are properly stocked, and its entrances and exits free of hazards. Regardless, accidents do happen in supermarket, some of which are other than the usual slip and fall. These injury claims are handled as premises liability matters since they occur on someone’s property. These can be difficult to resolve satisfactorily but many do result in substantial compensation if handled correctly by a premises liability lawyer. But there are also things you can do.

In an unusual premises liability case involving a super market, a Cleveland woman was awarded $1.3 million against grocery store chain, Giant Eagle, when another shopper struck her on her motorized shopping cart while in the store. The woman’s attorneys claimed that the store had failed to adequately instruct the woman on proper use of the electric cart and cited 119 injuries involving electric carts at Giant Eagle stores over a 9-year span. The filed complaint had also alleged that the company had knowledge of the hazard these carts posed due to the number of past injuries and failed to exercise care in preventing them.

The damage award was mostly for punitive damages with the woman receiving compensatory damages of $120,000. In Massachusetts, punitive damages are only awarded in wrongful death claims under certain circumstances.

This type of injury was pursued as a premises liability claim but might have also been handled as a product liability one depending on whether there were issues about a defect in the manufacture or design of the cart.

Super market injury claims are common though they can be notoriously difficult to settle since most claimants have little idea of what they entail.  Most such injuries are not from reckless electric cart operation but from other causes such as:

Many customers or shoppers are embarrassed by a fall or may feel that an injury was minor, only to later discover that they broke a hand or ankle or worse. At the accident scene, they may refuse treatment or neglect to even to report the fall to an employee. If they later return to talk to a manager, they will generally find skepticism and an unwillingness to acknowledge the incident or the extent of the injury since they could easily have injured themselves in some other manner.

Super markets are commercial enterprises and owe a high duty of care to its customers. This includes conducting regular inspections, cleaning the premises and letting patrons know of a hazardous condition. There is also the issue of notice in premises liability cases where the owner or operator must have had either actual or indirect (constructive) notice of the hazard. The danger or hazard must also have been a foreseeable one. For instance, it is foreseeable that a torn mat or food item spilled on the aisle can cause a slip and fall.

Notice of a hazard is direct if an employee observed it or management was advised. Constructive notice is presumed or implied if the hazard was present long enough so that the owner or its agents should, in the exercise of care, have noticed it and took steps to eliminate it.

In the case of the electric cart injury case, the patron who collided with the plaintiff was not instructed in its use. A jury found that the store was negligent in this regard since it was foreseeable that an uninstructed operator could lose control and run into other shoppers. Since so many accidents had occurred previously, the store was presumed to have had constructive notice of the hazard but failed to act to prevent future accidents.

If you did sustain an injury from a runaway electric cart, slip and fall or from some other factor under the control of the super market, then immediately have someone contact management. Other steps include:

What Your Lawyer Can Do

As indicated, premises liability claims are difficult and present different issues than you would find in a car accident claim. The store manager is required to draft an incident report that your attorney can subpoena.

The store manager, paramedics or physicians will want to know the cause of the accident. Be succinct and state you fell on a slippery floor or torn mat or that a shopper in an electric cart knocked you over. Other details can be reviewed with your lawyer.

The store report and paramedic and emergency records can document the injury and incident. Your premises liability lawyer will advise the store or its insurer of your claim and injury. All necessary medical records, reports, employment records and other documents supporting the nature and extent of your injury will be obtained by your attorney who will also monitor your progress.

An examination of the injury scene may need to be conducted quickly since the store will replace a torn mat. Of course, a slippery fall from food or other substance will be cleaned up immediately so it is vital that you take a photo of the fall scene or at least have a witness to verify it. In some cases, a witness may say that employees walked by the slippery floor or that they noticed the wet condition of the floor 15 minutes earlier and saw someone else nearly fall.

Video surveillance cameras may have captured the fall and even the spillage or object in the aisle or fall some time before the accident. Your attorney can request that footage be preserved or subpoena it before it is erased but it is not often saved. Cleaning and maintenance records from the store are also discoverable and may be requested by your attorney to see if the floors were inspected prior to the incident.

Your damages in a super market injury could be minor to extremely serious. Damages may include the following :

If you sustained an injury at a super market, immediately contact premises liability lawyer Neil Burns of Boston. Corroboration of the injury is essential as is notifying the store management and insurer of your claim and gathering all supporting documentation of liability and of your injury, wage loss and the effect on your daily living. Only an experienced and seasoned personal injury lawyer like Neil Burns can give you the legal representation required in these types of claims so that you get the compensation you deserve, call today: 617-227-7423.