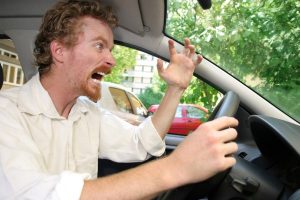 If you drive long enough, you will likely encounter road rage, an unfortunate symptom of the driving culture whereby a driver feels personally affronted by another motorist who may have cut him/her off or made a reckless maneuver that narrowly avoided resulting in a collision.  In most cases, the aggrieved driver may retaliate by honking incessantly at the other motorist, “flipping off” the driver or speeding in front of the perpetrator just to show him/her who is the boss of the highway.  In extreme cases, there have been incidents of motorists firing weapons at the other driver, crashing into the other vehicle or stopping the car and confronting the driver.  But when a major business or company’s driver is involved, we may not find out how the matter was resolved because of the use of confidentiality agreements.

Using your car to intimidate another driver or crash into another vehicle can be assault and/or battery, a criminal offense.  If you are threatened by another driver or put in reasonable apprehension of imminent physical harm, then the perpetrator may be guilty of assault. Battery is the intentional or non-consensual touching of another person in an offensive manner.  In the context of road rage, anger can escalate into a battery if the irate driver uses the vehicle to crash into you, attempts to run you off the road or exits the vehicle and pounds on your car.  In some cases, the driver may pull the other driver out of the car and pummel him.

In a 2014 incident in Los Angeles involving a Fed Ex driver and a motorist, the motorist brought a lawsuit against the driver and company alleging assault and battery as well as negligent and intentional infliction of emotional distress.  In this case, the motorist contended that the Fed Ex driver intentionally positioned his van in front of the plaintiff’s car, slowed so that the driver had to abruptly brake, prevented the motorist from passing him, and made inappropriate gestures to the driver.  Both drivers pulled to the side of the road but when the motorist attempted to take a photo of the van’s license plate with his phone, the Fed Ex driver knocked the plaintiff’s smart phone from his hand.

Although the physical injury may have been slight, the plaintiff can still sue for his other road rage injuries including battery and assault for placing the motorist in reasonable apprehension of imminent physical harm by his use of the Fed Ex van and by knocking the phone out of the plaintiff’s hand.  But because companies like Fed Ex generally include settlement confidentiality provisions in settlement agreements, we may never learn of the actual outcome of this lawsuit.  The result is that the road rage driver may continue to drive with no public accountability.

Use of Confidentiality Agreements in Civil Suits

Settlement confidentiality agreements are permitted in civil matters so long as both parties agree.  The parties generally agree to not disclose any details of the settlement to anyone and to state no more than that an amicable resolution was obtained.  The only exception to non-disclosure is if it is required by law such as to a government agency or the parties’ lawyers or accountants for tax purposes.

Such provisions are not uncommon in lawsuits where public companies like a Fed Ex are advised to shun bad publicity.  But these agreements come with a price especially if one party violates it.  Courts take written agreements seriously and will invalidate a settlement if a party violates the agreement by disclosing it in any manner, innocently or not.  In a Florida age discrimination case, a court invalidated a cash settlement when the defendant school alleged the plaintiff’s daughter had bragged about the settlement on her Facebook page.  The court agreed and the settlement was apparently voided.  No doubt but that this outcome comes as a stern message to keep your mouth shut if you enter into a confidentiality agreement or you risk loss of any monetary gains.

All motorists owe a duty to use reasonable care when driving and to obey the traffic laws. Most auto injuries are caused by negligent behavior such as speeding, making an unsafe lane change or following a car too closely and rear-ending it when it stops abruptly or for a red traffic signal.  Road rage is more of an intentional act since a motorist has taken offense to some act by another motorist, which could be a simple act of cutting in front or honking to avoid a collision.  The retaliation taken by defendants in such cases can result in injuries if the drivers use their car to run the other motorist off the road or actually crashes into him.  If the defendant intimidates or threatens the other driver or places him in danger of a crash, this can result in emotional distress.  Of course, stopping the other car and dragging the motorist out of the car and beating him can result in civil damages if not criminal charges.

Insurance companies may attempt to deny coverage in road rage injury cases if they feel the injuries were the result of an intentional act, which is why you need the services of personal injury lawyer Neil Burns.  In many cases, the resulting injuries were not intended by the defendant who will undoubtedly contend that he or she merely wanted to scare or teach the other driver a lesson.  In such cases, the courts will generally order the insurers to provide coverage.

Damages in road rage injury cases may include:

As indicated herein, some companies require a confidentiality agreement to accompany any monetary settlement.  Attorney Neil Burns can explain the significance of such agreements and the ramifications if you violate it and how it may be violated.

Contact personal injury attorney Neil Burns if you or a loved one was injured in a road rage incident or in any other motor vehicle accident.