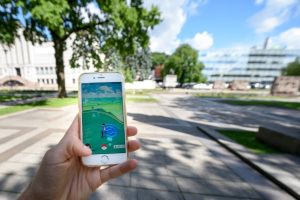 Pokemon Go is the latest interactive app on smart phones that has users roaming through city streets, parks and historical sites to hunt down these unusual animated figures. The game challenges users to find and capture these various Pokemon figures.  Unfortunately a substantial number of people are continuing to play the game while driving.  Most of these individuals are teens or young adults and, combined with their inexperience, feelings of invulnerability and passion for games, the practice can result in tragedy, as what happened recently in Japan.

Teen driving can begin as early as 16.  Over 80% of persons aged 16 to 17 own a cell phone with at least 50% having admitted to talking on one while driving with one-third having texted while driving.  Many parents are not proving to be proper role models in this behavior with nearly 50% of teens reporting that they have seen their parents engaged in similar behavior.

Teenagers are generally notorious for short attention spans, risky behavior and not using sound judgment.  Most of this is due to inexperience, immaturity and wanting to be constantly entertained.  Driving is a form of entertainment to some but it also demands that the driver be focused while operating a 5000 pound vehicle speeding at 55 mph or higher.  Distraction while driving can consist of:

Interacting with several passengers and the use of a cell phone while driving account for about 27% of distracted driving activities that lead to accidents according to the AAA Foundation for Traffic Safety.  This organization recently published studies indicating that teen distracted driving leading to collisions is more extensive than has been previously reported by the National Highway Traffic Association (NHTSA) that had the figure at 14%. For all distracted driving activities, the AAA study found that an astounding 58% of all teen car crashes studied were caused by some form of distraction. The organization had analyzed 1700 videos of teen crashes using in-vehicle event recorders or cameras.

AAA also found that use of a cell phone caused teen users to take their eyes off the road for an average of 4.1 seconds, but in more than half the crashes, teens failed to react to a hazard at all before the collision, meaning they took no evasive action or braked.

Commonsense tells us to not text and drive.  Playing Pokemon Go while driving is no exception.  CNN recently showed a video from a police body cam that depicted a Baltimore man who drove his SUV into a parked police cruiser.  In another news report, a New York man drove his vehicle into a tree.  Both admitted to playing the Pokemon Go game while driving.  Fortunately, no one was injured but things could easily have been otherwise.

You can, of course, bring a negligence cause of action against a driver who causes you injuries while driving distracted.  What may not be so obvious is whether the producers of the Pokemon Go game may be civilly liable for your injuries or for contributing to the death of a loved one.  The app does detect if you are in a moving vehicle and whether you are a passenger.  If you indicate “no,” then the app will not operate but any driver can merely indicate that he/she is a passenger so as to play the game while driving.  Players are often in vehicles looking for Pokemon and want the app to continue operating.  Accordingly, the app does not automatically shut the game down while you are in a moving vehicle.  Whether this is an inappropriate safety measure that could expose the game producers to liability or whether a person exercising ordinary care would know not to play the game or engage in any other distracted behavior while driving are arguments a court or jury may have to eventually address.

Injuries in a distracted teen driving accident can be substantial since many motorists are still unaware of the impending impact before it occurs. Damages may consist of the following:

Many teens drive used vehicles and if insured may only carry the required minimum liability limits.  In Massachusetts, this is only $20,000 per injured person, $40,000 per accident and $5000 for property damage. This is why it is so important you possess uninsured motorist and underinsured motorist coverage of at least $100,000 to ensure you are covered for any serious injuries you may sustain.

To receive the compensation you deserve in a car accident, contact personal injury lawyer Neil Burns.  Mr. Burns has extensive experience in car accidents including distracted teen driving accidents. Call his office today for a free assessment of your injury claim: (617) 227-7423