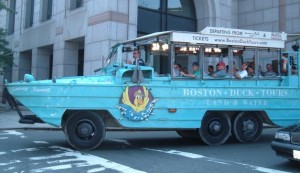 In a recent tragic accident involving a Boston duck boat driver whose tour vehicle struck and killed a 28-year old woman on a motor scooter on Beacon Hill, there are questions surrounding the employer as well as the vehicle operator.  Apparently, a review of the driver’s motor vehicle record revealed a number of startling facts that seemed to have escaped the attention of the vehicle’s owner and driver’s employer, Boston Duck Tours.

But the main question is why the employer, Boston Duck Tours, even hired this individual to operate its commercial vehicle at all?  According to the company CEO, Cindy Brown, they claimed its drivers are required to complete an 8 to 10 week training course that includes operation of the duck vehicles and safety procedures as well as submitting to random drug tests. Ms. Brown also claimed that its drivers had driven over 10 million miles on Boston streets since 1994 giving tours of the city and that its vehicles are popular among tourists and residents.  She also intimated that the department of motor vehicles had given them erroneous or incomplete information on the driver’s past driving record although this was not substantiated.

While news reports did not identify the cause of the collision, the Coast Guard confirmed that it had inspected and passed the duck boat vehicle last year during its mandatory annual inspection. CEO Brown also stated that its boat vehicles are inspected daily by mechanics.

Some attorneys who have handled accidents involving duck boats in other areas of the country have called for a ban of these vehicles on city streets.  Duck boats are former military vehicles and remnants from past wars and critics claim they have no place on the street or even in the water since they were designed to carry troops and not tourists.  A number of fatal accidents with these vehicles on streets in other cities as well as on the water have resulted in calls to have them removed from carrying passengers for commercial purposes. 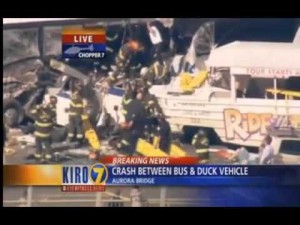 Often used as tour buses, duck boat operators are known to play loud music during the ride and strive to be entertaining while touring areas of the city.  Also, for a driver, having to navigate busy and sometimes narrow streets in a heavy and cumbersome vehicle, all while concentrating on giving entertaining commentary, can be distracting.

In injury and death cases involving commercial vehicles, the issue of employer liability is sometimes an issue.  This is important to injured victims or to relatives of a decedent since commercial operators are required to carry substantial insurance in case of accidents.

Employer negligence is based on either the actual negligent conduct of the employer or on the doctrine of vicarious liability.  In the latter case, a company or employer is responsible for the conduct of its employees so long as they were engaged in the course and scope of their employment when the accident occurred.

In the case involving the duck boat, the employer could be held vicariously responsible as well as for its own negligence.  The driver was apparently conducting a tour at the time or was driving the vehicle back to its garage; both instances would be considered in the course and scope of employment.

Further, hiring a driver with such an abysmal driving record should be a firm basis for holding the company responsible for negligent hiring.  Note cause of action may or may not be insured by the standard commercial motor vehicle policy; generally, in Massachusetts, companies are no so insured.

All commercial operators have a high duty of care to customers and to other persons on the roadways.  This duty includes finding and hiring competent drivers with proven safety records or who have few or no traffic violations on their records.  In this matter, the driver’s record contained so many moving violations as to give sufficient notice to the employer that this driver posed a substantial risk and should not have been considered let alone hired.

Damages are an essential component of any personal injury case and require the skills and experience of a car accident lawyer who knows how to find and present evidence to support a substantial case for compensation.  Damages vary based on the nature and extent of injuries among other factors that your attorney can review with you. Typical damages in a severe injury case may include:

In a wrongful death action, the immediate family of the decedent may seek the following:

Cases like the one where a duck boat operator may have negligently killed a young woman demand the services of an experienced and seasoned car accident lawyer who can obtain for you the compensation your claim deserves.  Boston attorney Neil Burns has handled numerous complex cases involving employer liability and commercial vehicles over his more than 30-years of representing the people of Boston and the surrounding communities.