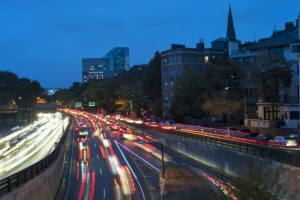 It only makes sense that lower speed limits would result in fewer traffic accidents and fatalities. This was been borne out by the experiment in past years when freeway speeds were reduced to 55 miles per hour at the height of the fuel crisis in the 1970s.  The rise in the speed limit was concomitant with more accidents and fatalities but at least people were able to arrive at their destination a few minutes earlier.

In Boston, the issue is lowering the speed limit on streets where there are no posted speed limit signs.  Under state law, the limit defaults to 30 miles per hour on these streets.  For many on the city council and for urban dwellers, this is too fast and poses an extreme risk to pedestrians and bicyclists.  According to city council members, the chief complaint they get from constituents is that cars are going too fast in their neighborhoods.

Studies have shown that a person struck by a car travelling at 30 miles per hour has a 50% chance of sustaining severe injury or death; at 20 miles per hour that risk is significantly reduced, to 18%.  Also, drivers proceeding at the lower limit are twice as likely to yield to pedestrians. However, it will take a petition from the city council to the state legislature to change the law to allow Boston’s Commissioner of Transportation to have the authority to implement the change.

Is Reducing the Speed Limit Effective?

Currently, it takes a drawn out traffic study on a particular street or roadway before a speed limit can be established.  Critics point out that the process is flawed in urban areas since the protocol states that traffic must be observed over a period of time to determine at what speed 85% of the traffic proceeds before setting the limit at or below that speed.  The problem is that this makes little sense in heavily populated areas that includes significant bicycle and pedestrian use.  Instead, critics assert that the speed limit should be based on the needs of the community at large and not on what drivers are doing or feel is best for them.

Other detractors argue that reducing the speed limit will not deter speeders and have little effect even if the limit is enforced.  The content that the more reasonable way to reduce speed is to install traffic calming measures such as:

Fortunately, Boston is safer for pedestrians than other major cities such as New York and San Francisco.  Still, it is the goal of Vision Zero, a comprehensive urban plan recently adopted in Boston, to reduce the number of cars in certain urban areas and make the streets so safe that fatalities from a traffic accident will eventually be rare or nonexistent.

Damages, like liability, need to be proved by your car accident attorney.  This means that in addition to proving that the defendant caused the accident, your lawyer must introduce evidence that your injuries were caused by or were the result of the accident.  This element of your injury claim along with proof that your medical expenses and income loss were related to your injuries must be supported or verified by your treating physician.  Also, pain and suffering, which is often the most substantial part of your damages, must also be supported by your own testimony, family members and your health care providers.  Your attorney is instrumental in demonstrating to the insurance adjuster, defense attorney or a jury how your injuries have impacted your life and your family.

Damages are both economic and non-economic. These include:

Boston attorney Neil Burns has been representing car accident victims, including passengers, pedestrians and bicyclists, for 30 years and has obtained millions of dollars in compensation for his clients, even in the most difficult of circumstances. Car accident claims are not always obvious and many claimants who try to settle their own claims or who use inexperienced attorneys are left with far less compensation that they would have obtained if they had a knowledgeable and seasoned attorney.

Call Neil Burns today for a free consultation about your injury claim.