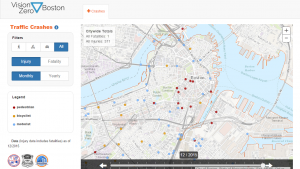 Vision Zero is here!  This is an interactive traffic-related web site containing a map of Boston where residents can zero in on streets, intersections or particular roadways to make suggestions to improve safety for pedestrians and bicyclists.  The web site is the Vision Zero Boston Safety Concerns Map.

The site was adopted from an idea from Sweden.  According to Citylab.com, a site dedicated to urban issues, Swedish urban planners developed the site a few decades ago with the novel belief that people who walk or bicycle the streets on a regular basis are the most knowledgeable about which areas present particular risks.  This includes streets where vehicles routinely run red lights or speed.

Other common issues that users and commentators on the Swedish and now Boston Vision Zero site regularly point out are that bicyclists and pedestrians are threatened by poorly designed streets, decrepit sidewalks, and lack of crosswalks.  Other problems are that walk light times are insufficient for pedestrians to safely cross a street, that there are a prolific number of double parked vehicles on certain streets and that some roads are plagued by potholes or other features badly in need of maintenance or repair.

The Swedish site reportedly led to diminishing the number of traffic fatalities in half.  Boston officials are hoping that the site will have the same effect.

Mayor Walsh is confident that the site will be a factor in totally eliminating traffic fatalities by 2030, a lofty but worthy goal to be sure.

A Simple Interactive Site to Report Injuries or Hazards

The Vision Zero Boston Safety Concerns Map web site is simple to operate.  Users simply zoom in on the area of concern and click on the location. You may then make a comment about the site and perhaps a suggestion to remedy the dangerous condition that is present.  People can indicate that they are pedestrians or bicyclists who have experienced the particular problem or who have routinely observed it.

The aim of Vision Zero is to change the basic philosophy and strategies of street design that relegates pedestrians and bicyclists to second class citizens.  Streets need to be safe for all and not be designed just to ensure that the mass of autos move quickly through urban streets. Motorists obviously have the upper hand and traffic engineers in past decades have striven to design roadways that are intended to reduce traffic jams and potential accidents that may involve only motor vehicles. New technology and more inclusive policies along with increased traffic law enforcement can level the playing field for others.  Simple changes can reduce speed, a main culprit in traffic accidents and fatalities, enhance visibility and time for pedestrians to safely cross streets. Bike lanes can also improve safety as can more intensive public awareness fostered by media attention.

Maintenance issues, city officials stressed, should still be reported on the 311 phone line.

Boston car accident lawyers are still needed because of the careless and reckless conduct that still exists on Boston streets.  If you or a loved one was injured or an immediate family member suffered fatal injuries, contact car accident lawyer Neil Burns.  He has been an integral part of the Boston personal injury legal community for over 30 years, representing the rights of injured victims and their families.