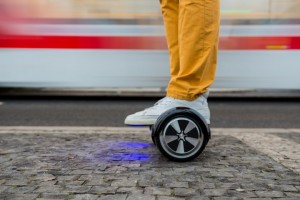 Hoverboards have been in the news recently after a spate of fires engulfed the devices and in some cases, the house or structure where it was charging.  The boards do not literally hover, of course, as its name was derived from a levitating skateboard ridden by the main character in one of the “Back to the Future” films.  In reality, these are motorized self-balancing scooters that operators control with their feet.  Though extremely popular, concerns have arisen over their safety.

The boards contain a lithium ion battery that has to be periodically charged.  Fires have reportedly been caused while the devices have been charging and some operators have said that their boards literally exploded while in use.  Serious burns and other injuries can result in such instances.  You can also fall off the boards or collide with objects or pedestrians from lack of control.

The Consumer Product Safety Commission is investigating a series of fires involving the boards. A state consumer products organization called S.A.F.E. that provides a list of unsafe toys criticized manufacturers of the boards saying that they have not been adequately tested and manufacturers should not be using adults or children as essentially lab rats to test their safety.

There are no standards or regulations governing these devices, highlighting the problem that technology will usually outpace regulatory guidelines so that companies can slip products into the market without having to comply with specific standards including those regarding safety.

Tech companies have joined with fire department spokesmen to warn consumers about the dangers and risks involved with these devices and with special concern regarding cheaper brands.  Some of these boards run as high as $2000.  Whether only less expensive models were prone to catching fire or exploding has not been directly addressed.

Because of the fire risk, some airlines are prohibiting passengers from bringing hoverboards on its planes.  Malls that already ban standard skate boards and bicycles are including hoverboards as well, especially after a Florida mall was forced to evacuate shoppers when a board being ridden by someone in the mall suddenly exploded.  A Florida woman also claimed her house burned down after sparks flew from a hoverboard that her son was charging in the home.

Massachusetts colleges are also banning the boards, including Emerson College, UMass-Amherst and Amherst College.  UMass-Amherst has a ban that includes hands-free Segway or self-balancing scooters.  So far, at least 30 colleges and universities have issued bans with more probably to follow suit.

Along with the risk of fire, people do fall off them from loss of balance or from collisions. Emergency rooms have reported users with fractured limbs, head injuries, internal organ injuries, lacerations and back and joint injuries.

Whenever someone is injured from using a product, there is an issue of whether the product was defective, either in its design, manufacture, advertised use or any combination. Manufacturers of consumer products have a duty to consumers to produce devices that are safe to use if used as intended.

They must also be tested to determine if there are defects in the product that could harm a user.  In the case of hoverboards, manufacturers may not have conducted any tests or if they did, may have ignored results, minimized the dangers or failed to warn consumers.  Even in the absence of regulations that apply specifically to hoverboard design or production, these companies still owe a general duty of care along with warranties of merchantability and fitness. The former promises that the product will work as expected. The latter is an implied promise that it is fit for a particular purpose.

In the case of hoverboards, no one expects the board to catch on fire or to explode if used as expected or for its intended use.  The defect may be in the design or, if the fire hazard exists only in cheaper models, perhaps both in design and manufacture.  If a defect is found and it causes an unreasonable risk of harm, then the manufacturer and seller can be held strictly liable and the injured claimant need only prove damages.

Liability to Others from Massachusetts Hoverboard accidents.

Massachusetts injury attorneys are also expecting cases in which third parties are injured as a result of hoverboard accidents.  Hoverboard riders that collide with pedestrians, or run bicyclists off the road can be held responsible; while their auto insurance is not likely to be responsible, their homeowners insurance may cover their negligence.

Call an experienced injury lawyer who can handle product liability claims since these causes of action are typically complicated in terms of proving liability.  Neil Burns has been representing the rights of injured claimants in the most difficult circumstances for over 30 years.  Contact his office for a free, in-depth analysis of your injury claim.