Jaywalking is as common in Massachusetts as talking on your smartphone while driving or not coming to a full stop at a stop sign. All of these activities are illegal, but enforcement is somewhat random and generally does not come into play until an accident has occurred. 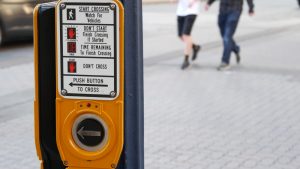 As a pedestrian, you have to obey traffic signals when crossing the street and to cross in a crosswalk on a green, “Walk” or “Go” signal, if it is present, or while crossing in an unmarked crosswalk at an intersection. Failure to do so is considered jaywalking and can subject the offender to civil fines. It is also dangerous and can result in a fatal encounter with a motor vehicle.

Pedestrians include anyone using a human-powered device such as a longboard or roller skates but not bicycles. Motorists have a legal and statutory duty to yield to pedestrians in a crosswalk or unmarked crosswalk at an intersection if there are no traffic signals. According to Massachusetts law, a motorist must stop for the pedestrian if she is on that half of the crosswalk where the vehicle is traveling or is approaching from and less than 10-feet from the opposite half.

Further, a car may not pass a vehicle that is stopped on either side of a crosswalk to allow a pedestrian to pass. Car also may not stop on a crosswalk.

Can You Sue Even if Jaywalking?

Even if you were jaywalking when struck by a motor vehicle and suffered injuries, you may still be able to collect compensation, but it depends on the circumstances of the incident. Massachusetts is a comparative negligence state where your own degree of fault cannot be more than 50% or you cannot collect any compensation. If it is 50% or less, your compensation will be reduced by your percentage of fault. Of course, it is a subjective judgement as to what percentage of fault should be assigned to you and to an involved motorist.

For instance, if you suddenly ran out into the middle of the street or unsafely stepped off a curb in front of a vehicle, you may be found totally at fault since the vehicle was too close to avoid the collision. These scenarios are based on whether the motorist had a reasonable opportunity to see and react to your sudden presence. But if you were in a crosswalk despite a red signal or a “Don’t Walk” sign but were well into crossing, a motorist must stop and avoid a collision despite your breaking the law.

In any case where you suffer serious injuries from a collision with a car and liability is at issue because you may have been jaywalking, contact an experienced car accident attorney who can investigate your claim and determine if the motorist had the requisite degree of liability for you to recover.

Be Safe Crossing the Street

You can safely cross any street by following these simple, commonsense suggestions:

Although your damages may seem obvious, only a seasoned and diligent car accident attorney can adequately accumulate documentation of your injuries and damages and present them so as to convince an insurance adjuster, defense attorney, or jury that they are valid and compensable.

Per Massachusetts law, you have 3-years from the date of the accident to file your claim in court. However, the sooner you retain a car accident attorney, the more favorable are your chances of a satisfactory resolution.

Have a car accident attorney from Burns and Jain represent you as soon as possible so that you can obtain the compensation your claim deserves. Call our office at (617) 227-7423 for a free and comprehensive evaluation of your injury claim.