A crash in early August on Route 9 in Westborough that fortunately only resulted in minor injuries to the driver who was wearing a seat belt drew unusual praise from the Westborough Police who also warned people about the dangers of texting and driving. 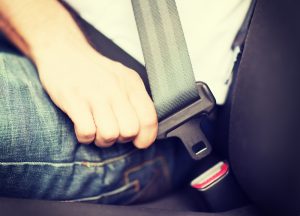 To most people, buckling up in a car is almost instinctual. But Massachusetts has among the lowest rate of seat belt use in the nation. In 2019, only 74% of state motorists used seat belts, well below the national average of 90%. Many safety advocates blamed a state law that made wearing a seat belt only a secondary violation, meaning that police could not stop and cite you for not using a seat belt unless the stop was for another traffic violation.

The law changed this year, and now a seat belt violation is a primary offense. Accordingly, seat belt usage has shot up to 84% in our state, but still below what the rest of the nation’s drivers are doing.

Seat belts save lives, and everyone knows it. Statistics and studies show:

Possible injuries that can be prevented by wearing a seat belt are:

There is no excuse for not wearing a seat belt and making sure all passengers are restrained.

Your failure to wear a seat belt in an accident caused by another driver that resulted in your injuries can be used against you in an injury claim. If the defense can prove that wearing a seat belt could have prevented the injuries you sustained, then the trier-of-fact could reasonably conclude that you were comparatively negligent in causing your injuries. This is just one reason why you will need to retain an experienced personal injury lawyer to handle your claim if not wearing a seat belt is an issue.

Dangers of Texting and Driving

Current Massachusetts law only allows hands-free use of a smartphone and bans all texting except if initiated and performed by voice command. No driver under the age of 18 can use a cellphone at all. A teen with a Junior License risks a 60-day license suspension if in violation. The only exceptions are for first responders or if you swipe your phone to activate, deactivate or to initiate hands-free mode.

The National Safety Council estimates that about 390,000 injury accidents occur annually from texting and driving, or one of every 4 accidents. There were 2,841 deaths attributed to texting and driving in 2018. In a survey, 35% of teen drivers admitted to using a cellphone while driving.

Teens who do text and drive appear to exhibit other reckless behavior including a greater tendency to drink and drive, to not wear a seat belt, and to get in a car with an intoxicated driver. There is no reason to think that adults who text and drive are just as likely to not conduct themselves safely while driving.

All drivers owe a duty to exercise ordinary care toward others using the roadway. This includes obeying the traffic laws and driving cautiously. Texting and driving has been shown to reduce brain activity associated with driving by 37% according to reports published by the Children’s Hospital of Philadelphia. You are also less likely to notice a hazard in the road such as a pedestrian, or to notice a red traffic signal.

Damages can be difficult to prove or an insurance adjuster may discount them for some reason. A seasoned personal injury lawyer can give you the best opportunity for obtaining the most compensation for your damages.

Few car accident claims settle quickly or are without issues that can jeopardize or substantially reduce the value of your claim. Call us to discuss your accident claim and what we can do to help you. Contact the law firm of Burns and Jain at (617) 286-3594 for a free consultation about your injury claim.