Rollover accidents generally result in catastrophic injuries if not death to the vehicle occupants. If the defendant responsible for the accident fled the scene, then the tragedy is compounded since a responsible party is evading responsibility.  What are the dynamics of a rollover accident, and what can you do if your loved one was killed in a Massachusetts car accident that was a rollover and/or a hit-and-run accident? 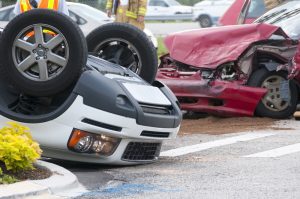 How Do Rollovers Occur?

Rollover accidents are particularly devastating since the vehicle’s occupants are essentially helpless as the car spins and rolls out of control.  These often occur at high speeds when the vehicle strikes a curb or guardrail, hits a snowbank, rolls down an incline, or the driver turns too sharply. SUVs are especially vulnerable to rollover accidents given their high center of gravity. About one-third of auto accident deaths and 20% of catastrophic car injuries are attributed to rollover accidents. You are also 10-times more likely to be killed or to suffer an incapacitating injury such as traumatic brain or a spinal injury in such accidents.

You can lose control of your vehicle on a freeway when another vehicle suddenly veers into your lane of traffic and you take extreme evasive action that causes the car to strike the median, curb, roll down an embankment, through a guardrail or slide on an icy roadway.  Many of these accidents result from the conduct of a drunk, drugged, or distracted driver who is traveling at extreme speeds, had fallen asleep at the wheel, or was weaving in and out of traffic.

Rollover accidents can result in occupants being ejected from the vehicle through a door or window.  If not wearing a seatbelt or the restraint fails to keep the occupant secure, then the person can be ejected.  Also, a door latch may have failed, or the window glass was too weak. Your chances of either being killed or suffering a serious injury are high, and you risk being run over by another vehicle or striking an object outside the vehicle such as a tree, median, or guardrail.

Wearing a seat belt increases your chances of not being ejected, though you still are vulnerable to a failed roof that collapses and crushes you. You are also prone to being violently thrown against the car door or being victim to shattered glass that can pierce you. In any scenario, a rollover accident poses numerous opportunities for you to be injured or killed.

If your loved one was not wearing a seatbelt and was ejected and killed, or was killed from injuries sustained inside the vehicle, an insurer can assert that you loved one would not have suffered fatal injuries if properly restrained.  However, if the vehicle was crushed or other occupants in the vehicle died despite being restrained, this is powerful evidence for asserting that death would have occurred, nonetheless. If there is a seat belt issue in a serious or fatal car accident, retain a car accident lawyer who has handled such issues successfully.  Generally, a human factors engineer is retained by both sides to argue this issue.

There has been litigation brought against SUV manufacturers whose cars are twice as likely to rollover than other vehicles due to their narrow wheelbase and high profiles who could have taken measures to reduce the incident of rollover accidents and injuries.  Some of these and other vehicles have poor roof strength that collapses in a rollover, killing or maiming the occupants. If the occupants are trapped inside, they may not be extricated in time to save them from loss of blood, or a fire may occur that ultimately kills them.

If your loved one was killed in a rollover accident, you should consider retaining a car accident lawyer experienced in product liability litigation.  Your lawyer needs to not only consider the possible liability of the motorist who may have caused the accident but the designer and manufacturer of the vehicle. Other possible parties are the designers and manufacturers of a car seat or seat belt that failed to restrain your loved one; an airbag that did not deploy; a door latch that failed to keep your loved from being ejected; or a tire that had faulty tire stems, bead failures, or tread cracks that caused a tire to explode and the car to rollover.

In cases like these, there is strict liability imposed on the designer and/or manufacturer of the vehicle or of a piece of equipment that failed to protect your loved one. Your car accident lawyer will have to prove any of the following:

If strict liability is found, then only damages need to be proved.

Otherwise, your car accident lawyer will have to at least show that another vehicle was involved before the uninsured motorist coverage (UM) for your loved one’s vehicle will apply.  Your lawyer will also have to show that the unknown driver’s negligence caused the accident. If the other car struck your loved one’s vehicle, that is at least evidence of another car’s involvement.

If there are no witnesses, no video evidence, no damage to the car, or no one survived the accident who can testify that another vehicle was involved or that caused the accident, then it can be very difficult to sustain an UM claim.

In any case, be sure you have sufficient underinsured and underinsured motorist coverage. These can be purchased for up to $500,000.

Damages in wrongful death claims can be extensive, especially if your loved one was young, employed, had small children, and was in excellent health. You can assist your car accident lawyer in proving damages by providing family photographs, awards earned, and testifying as to the decedent’s character, counsel, diligence, work ethic, devotion to family, and participation in recreational and volunteer activities.

Damages in these cases typically include:

Rollover and hit-and-run accidents often pose difficult issues of liability, causation, insurance coverage, and damages. Only a highly experienced car accident lawyer should handle such complex cases if you want to obtain the compensation you and your family deserve. Call Burns and Jain today at (617) 221-7971 for a free consultation about your injury or wrongful death claim.