During our long winters, a common sight is that of snowplows on our highways, clearing off the snow usually during the late night or early morning hours to prepare for the morning commute. Plows can also be seen in parking lots and on suburban streets in the twilight or evening. These vehicles are large and of necessity slow-moving, and can present a hazard to other motorists wherever they operate.

Recently, a motorist was killed, and two passengers critically injured in Roxbury, Massachusetts when the driver apparently struck the back of a snowplow, causing it to spin around and rip the sander off. Damage to the car was extensive. The accident occurred around 1:00 a.m. 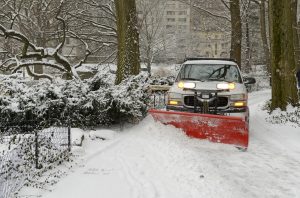 Snowplows may be easily visible on the road due to their size, but their slow speed often frustrates motorists who will look for opportunities to pass the plow. Unfortunately, the motorist who had a traffic lane freshly cleared of snow a minute ago now may now find the passing lane packed with snow and ice. If the driver had maneuvered back in front of the plow but had to slow down too quickly without having given himself enough space between his car and the plow, the snowplow may rear-end the vehicle. Larger vehicles have longer stopping distances than that of passenger vehicles so the risk is significant. Or, the motorist may see that he is now free to speed up but loses control of the vehicle since the road condition is less than optimal.

If the plow was on a two-lane road, the motorist when passing may fail to see approaching traffic if it is snowing or sleeting or may have misjudged the oncoming vehicle’s distance and speed and not have enough time or speed to sufficiently move in front of the plow. In any event, be especially cautious when passing a snowplow at any time.

Other Causes of Snowplow accidents

Though motorists need to be mindful of snowplows on the road and to pass them with extreme caution, the snowplow operators may be at fault in some of these accidents. The factors behind these accidents include:

Most snowplow operators have other jobs and may have been called to plow a roadway, ramp, or parking lot after having already worked an 8-hour or more day. Some may have been drinking at home or at a bar when summoned. If the driver is new, he or she may be unfamiliar with the equipment or how the vehicle maneuvers in traffic. If the driver has been plowing for several hours, boredom or fatigue may cause the operator to become drowsy, fall asleep for a few seconds or more, or engage in distracted behavior to keep himself alert and awake.

Further, if it is still snowing or the snowplow driver is on a poorly lit stretch of roadway, the chances of running into another vehicle is greatly enhanced.

To increase their visibility, the Michigan DOT recently installed oscillating green lights on the backs of its snowplows to reduce rear-end accidents. But for the most part, operators need to be well-rested and the owners held accountable for ensuring that the equipment is well-maintained and routinely inspected before every plow session.

Drivers should also be trained in the standard operating procedures with full knowledge of the plow’s equipment and be familiar with the assigned plowing routes so as to be aware of a roadway’s idiosyncrasies and possible hazards. Owners as well as drivers also need to be held accountable for drug and alcohol consumption.

Most cities or municipalities retain private companies to plow their roadways. These companies and their drivers are commercial operators with a high duty of care to motorists and pedestrians, and are obligated to comply with all local, state and federal regulations. If the driver was ill-trained, impaired, driving in excess of the legal maximum, was fatigued, inattentive, or otherwise failed to exercise care in operating the plow and caused an accident, the owner or company will be held liable for all damages. As an example, commercial drivers are presumed to be under the influence if their blood alcohol concentration level (BAC) is 0.04%, which is half for that of an ordinary motorist. Any violation of a statute or regulation pertaining to the company, operator or the vehicle can be evidence of breach of the duty of care to the public.

Damages in a Snowplow Accident

Your damages in snowplow accidents are dependent on the nature and extent of your injuries. Typical damages include:

While snowplow accidents are not as common as accidents involving other motor vehicles, the resulting injuries and damages can be substantial. Often, snowplow companies will defend themselves with highly experienced defense attorneys who will fight such claims at every step of the process. If you or a loved one was injured in a snowplow accident, immediately call the Burns and Jain law office at (617) 227-7423 to schedule a free consultation about your injury claim.