Ever wonder about our state’s laws on texting and driving or using hand-held phones while driving? All states except Arizona and Missouri ban texting and driving by all drivers. However, not all states ban any and all use of handheld phones while driving, which includes Massachusetts. That may change as the state house is considering a bill passed by the senate in January that does just that. 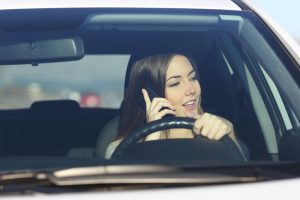 Massachusetts Governor Charlie Baker proposed the measure as part of a larger effort to reform some of the state’s laws on seat belt enforcement, cell phone use, and protection for city workers in construction zones. For instance, a police officer is currently prohibited from pulling you over for not wearing a seat belt. The officer can only cite you for nonuse if you were stopped for another traffic or equipment violation. The new law would make the failure to wear a seat belt a primary offense so that you can be pulled over for that alone. Since Massachusetts motorists consistently rank among the worst users of seatbelts, this is expected to raise usage by at least 10% and put us at or near the national average of 90.1%. Opponents of the measure have argued that making this a primary offense offers a pretext for officers to profile and pull over African-Americans and other persons of color in disproportionate numbers. Studies, though, show that 18 lives per year in our state could be saved and it would prevent some 650 injuries if more of us just buckled up.

Another provision would make it mandatory for first-time DUI offenders to install ignition interlock devices on any vehicle they drive once their licenses are returned to them for a period of time.

But the one measure that is being lauded the loudest is the new ban on any use of a handheld phone unless you are using it to activate the Bluetooth or voice feature on the phone. The law as it presently stands only prohibits texting while driving. Police officers have long complained that suspected offenders would tell them that they were only dialing a number and not texting, which is not barred. Now, if the officer observes you talking while holding the phone or using your fingers to do anything other than swiping or pressing one key, the officer can assume you are not just activating the hands-free features.

With a hands-free phone you are permitted to talk, text, or use the phone in any other manner. Just keep your hands on the wheel.

The Epidemic of Distracted Driving

Drunk driving has long been a plague on our state and nation and continues to cause countless tragedies despite stiffer penalties and laws that make it easier to convict impaired motorists. But since cellphones have become ubiquitous, many people find themselves unable to be or go anywhere without being connected to their smartphones including while driving, and risking serious injuries to themselves and others.

Many safety advocates feel that distracted driving has overtaken drunk driving as the number one cause of traffic deaths. A distraction is any action or behavior that takes your attention away from driving, including eating, talking, or grooming; but cellphone use is the main culprit. According to the Centers for Disease Control and Prevention, 9 people die, and 1,000 others are injured each day in the U.S. due to distracted driving. In the past few years, 18% of all distracted-related fatalities have been from cellphone use. For drivers aged 15-19 who were involved in fatal accidents in the past few years, 21% were using a cellphone.

When you text and drive, you are 23 times more likely to be involved in an accident. The National Highway Traffic Safety Administration also reported that driving and texting is 6 times more dangerous than impaired or drunk driving. The average time for sending or reading a text is just under 5 seconds, long enough for you to miss a dangerous road hazard. When texting, you may as well be driving blindfolded.

Retain a Distracted Driving Lawyer from Burns and Jain

If you or a loved one was injured in a car accident because the other driver was using a cellphone or was otherwise inattentive, you may have a substantial claim for compensation. Do not attempt to handle your claim without a skilled and experienced distracted driving lawyer from Burns and Jain representing you and presenting your claim and damages so that you have the best opportunity to obtain the most compensation for your claim.

Call Burns and Jain today at (617) 227-7423 to schedule a free consultation about your injury claim.