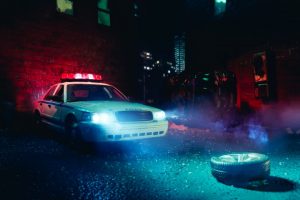 Car accident injury claims are one of the most common types of personal injury claims and lawsuits that are filed, but one involving a police vehicle are less common. This is primarily because police officers perform a vital public safety function and liability on their part can be difficult to prove. For instance, when an officer is responding to an emergency or urgent call, the vehicle’s siren and flashing lights are a warning to motorists to pull over and to allow the vehicle to pass, much like an ambulance or fire truck. In many instances, motorists ignore the obvious signals and fail to stop or take any action to avoid interfering with the officer responding to the emergency.

Emergency situations where police vehicles may be found exempt from traffic laws or liability include:

However, police are not immune to being found civilly responsible for causing an accident or to being found criminally liable in some situations when their actions fall outside accepted or established police practices.

For example, in July, 2018, a Greenfield police sergeant was charged with negligent motor vehicle homicide when his police vehicle collided with and caused the death of a New Hampshire man. According to reports, the officer was responding to an urgent call regarding an erratic driver. Although other officers were closer in proximity to the subject driver, the sergeant sped to the area at a speed of 83 miles per hour on a street where the posted speed limit was 30. The victim had stopped at an intersection and proceeded forward before being struck by the police car. Another officer investigating the accident opined that at that speed, the victim could not have seen the approaching vehicle. That same officer also stated that the sergeant “failed to exercise proper caution or show regard for the safety of other persons and property.” Minutes earlier, another officer responding to the identical call had proceeded at 40 to 50 mph on the same stretch of roadway. Further, there was no indication that the officer had his siren operating.

Under normal circumstances, traveling at above the speed limit or speeding and causing an accident is an obvious basis for finding liability. However, if an officer has his emergency lights on and siren, then the officer can exceed the speed limit but so long as he or she demonstrates proper caution and regard for the safety of others. To translate, this likely means not traveling 50 mph over the posted speed limit, to have all emergency lights and siren on, and to exercise reasonable caution. This may include pausing at a stop sign or red traffic light or ensuring that no one is in crosswalk. Many police and passenger vehicle accidents happen due to:

In the tragic Greenfield incident, it appeared that the officer was operating a vehicle without an overhead light and may not have had his siren on or the function was not available on that vehicle. In any event, the substantial speed of the vehicle and the fact that the victim could not have seen the approaching vehicle in the moments before the accident are pivotal in determining that he will likely be held at least civilly liable for the death of the victim.

Police are employees of the state or county. Consequently, different rules apply when presenting a tort or injury claim against the officer or police department. Such claims must be brought pursuant to the Massachusetts Tort Claim Act. You first must present written notice of the claim to the appropriate police department within 2-years of the incident and include certain information including the identity of the officer, facts of the accident, and claimed injuries and damages. Many counties and cities offer their own instructions and forms to be used. Once presented, the employer has 6-months to accept or reject the claim. If rejected, which is routine in most injury claims, you have 3-years from the date of injury to file it in court.

Compensation for claims against a police department, which is a public employee, is limited to $100,000. In wrongful death claims, this amount is woefully inadequate to compensate the family of the decedent. In some cases, other parties may be held at fault. For example, defective roadway design may have contributed to the accident, or another motorist may have acted negligently. If the victim’s airbag failed to deploy, or a seat belt or child safety seat did not perform as expected or advertised, then you may have a product liability cause of action against another party. In such cases, retaining a skilled and resourceful car accident lawyer from the Law Offices of Burns and Jain is essential.

Damages in a Police Car Accident

Damages in a car accident injury claim may be:

If a fatality occurred, then damage can include:

Punitive damages are not available against a public entity such as a police department but may be imposed on the individual officer if his or her conduct demonstrated reckless or callous indifference. Damages are not paid by insurers and must be collected from the individual’s personal assets.

Accidents involving police cars are uncommon though when they do occur, you will need the legal services of a car accident lawyer familiar with such incidents and how to handle them. Call a car accident lawyer from Burns and Jain if you or a loved one was injured or killed by the negligence of a police officer at (617) 227-7423.