Storms can be dangerous for driving and motorists are often warned to either be especially cautious or to avoid driving at all in severe weather. Most accidents in a storm occur because of visibility problems, travelling too fast for conditions or losing control. For an unfortunate Plympton man, a storm cost him his life when a large tree fell and crushed his truck on his way home. 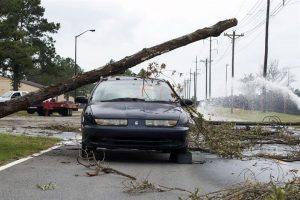 The accident occurred on Cedar Street in early March during a Nor’easter, a weather phenomenon with which most New Englanders are familiar. These are violent storms usually accompanied by heavy rain or snow and can cause massive flooding. The 36-year old man, an electrician with 2 young sons, was in a wooded area when strong winds apparently felled a tree that came down on the man’s pickup truck. Nearby residents called emergency personnel to report the incident but it took police nearly 45 minutes to reach the truck because of other downed trees on the road. The man was pronounced dead at the scene.

Is There Liability for an Accident in a Storm?

Property Damage in a Storm

Storms can cause extensive property damages and trees falling on cars is not an uncommon occurrence in any area where trees are present. So long as you have comprehensive coverage for your auto, you should be covered for the property damage (to your vehicle). Having such coverage is essential in New England because of our severe weather that can cause trees or other debris to damage a vehicle.

Comprehensive insurance does have deductibles so you would have to meet that first. Most deductibles are $500 or $1000. If your car was struck by a tree from a neighbor’s property, you would still look to your own policy. You would have only a claim against your neighbor, that would likely fall under his/her homeowner’s policy if your neighbor’s negligence led to the fall of the tree.

Comprehensive only pays up to the replacement value of your car. You can choose coverage for new car replacement if you are the first owner of the car.

Personal Injury in a Storm

But what about personal injuries or in the case of the Plympton tragedy, wrongful death? Is there any recourse for you if injured or for a decedent’s family regarding compensation?

Most accidents that occur because of severe weather are considered “acts of god.” Many insurance contracts, as well as other business contracts, have clauses known as “force majeure” that limits liability for events that outside human control. In other words, if it is an accident that could not have been prevented by human care, diligence or skill, but occurred by the violence of nature, no person or entity can be held liable. No one was negligent, or responsible.

However, the fact that a natural event occurred does not entirely limit liability. For instance, what if the tree that fell on your car was from your neighbor’s property? If your neighbor knew that the tree was unsteady, was dead, or he had been trying to cut it down but stopped halfway, then you likely can show that the tree would have fallen at least under storm conditions, which are foreseeable events.

For the Plympton man’s family, they would have to demonstrate similar negligence by the landowner. It may also be difficult to prove that this particular tree was prone to falling over. Other trees in that area had also fallen from the storm and blocked the roadway, which prevented police from reaching the man for nearly an hour after receiving the 911 call from area residents. However, a possible argument could be that since Nor’easters are common occurrences and trees felled by such storms on this roadway have occurred at multiple times I over the years and injured previous motorists, then reasonable care on the part of the landowner might be to remove trees so close to the roadway.

Motorists who plead an “act of god” defense will have to show that their actions were reasonable under the conditions. If during a snowstorm a car slides into you and rear-ends you, that motorist will find it difficult to claim that his actions constituted ordinary care since he was aware that there were icy conditions and should have been more cautious since driving slowly and at a safe distance would have prevented the rear-end collision.

Storms conditions can lead to catastrophic accidents. If another party was acting negligently and failed to exercise reasonable care by not repairing or warning of a dangerous condition such as unsteady, diseased or damaged trees that pre-dated the storm, then you may have an injury claim against that party.

Retain The Law Offices of Burns and Jain

Difficult cases require high levels of experience and knowledge. The attorneys at Burns and Jain have been handling complex cases for decades with an impressive record of success. Not all cases involve liability by another party, but our attorneys will explore all possibilities and full investigate the circumstances of each claim to determine which parties may have caused your accident injuries. Call our offices today to discuss your accident claim and how we can help – 617-227-7423.