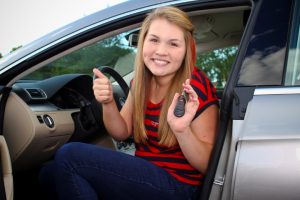 It only makes sense that young, inexperienced drivers pose a greater risk than those who have been driving for years. Statistics from across the nation are consistent in showing that car accidents are the number one killer of teens. Young drivers are more likely to speed, drink and drive, and use their cell phones than older groups of drivers. They also use seat belts less frequently, a major reason for catastrophic and fatal injuries in a crash.

In an effort to increase the safety of all motorists, a bill proposed in the Massachusetts House, would require teen drivers to have 2 copies of a decal or magnet conspicuously posted on their car to alert other motorists that they are novice drivers. The designation would also show law enforcement that the driver has a learner’s permit or junior operator’s license and would prompt the officer to observe from his or her patrol car if the driver was complying with the restrictions imposed on learner’s permits and junior licenses. However, not everyone is in agreement over the decals. Still, the statistics on teen driving and accidents are sobering.

Although teenagers comprise about 14% of the overall population, they account for 30% of all car accidents. The factors involved in most teen car accidents include:

Although you are speeding even if you are one mile per hour over the posted speed limit, most teens feel you are speeding if you are driving at least 10 miles per hour over the limit. In serious crashes involving teen drivers, 21% are due to speeding. Speeding decreases the time you have to perceive and react to a road hazard and increases the distance you need to be able to stop in time.

Everyone has a cell phone and teens are no exception. In fact, seeing a teen who is not using their cell phone at any one time is unusual. However, many use their phones while driving to text, send emails, listen to music or to look for information. All teen drivers are required to use hands-free technology while driving, but this still results in less focus on driving, which is essential for inexperienced drivers. Another distraction is having a peer as a passenger. Statistics show that a teen’s risk of an accident doubles with a peer as a passenger and triples with two or more.

Teens with junior licenses or learner’s permits are prohibited from driving at night. Visibility is less, there are more drunk drivers on the road, and you are less likely to notice a road hazard and to react in time to avoid it. If inexperienced, the risk is greater.

Massachusetts drivers are notorious for failing to buckle up, placing us as the 4th worst state in the nation. Couple this with drivers age 16-19 as having the lowest seat belt use of any other age group and you see the problem, especially since Massachusetts still considers seat belt violations as a secondary offense. In states where it is a primary offense, seat belt use among teen drivers is 12% higher and is 15% higher for teen passengers.

Alcohol is easy to get, whether from a parent’s house or use of a fake ID. Teen drinking is a problem, whether from peer pressure or from the lack of knowledge and experience of how drinking affects driving behavior. For some teens, the last thing they want is for their parents to know they have been drinking so they drive home anyway. Car crashes account for the deaths of 35% of 16-20 year olds and over 36% of those fatalities involve teen drinking. According to the Centers for Disease Control (CDC), drivers under the age of 21 are 17 times more likely to experience a fatal car crash if their BAC is 0.08%, the legal limit for adults, then if their BAC was zero.

Are New Driver Decals the Answer?

Proponents of the decal bill for teen drivers argue that they will give other motorists notice that an inexperienced driver is behind the wheel and to take more precautions. Law enforcement can check to see that the driver is complying with the restrictions on permits and junior licenses, such as driving only within prescribed hours and that an adult be present at all times. If a peer is a passenger, then a family member who is an adult must also be a passenger. It could be a deterrent to teen drivers to comply with these restrictions since police can easily see if they are driving during restricted hours or only have peers as passengers.

Some feel that the decal requirement would only serve as a stigma or would motivate other drivers to peel past them or treat them with disdain. One lawmaker felt this was a step toward requiring future identifying designations such as for drivers over 70 or for those with certain medical conditions.

As for our state, our teen drivers have been exemplary. A study from CarInsurance.com showed that the Bay State is the safest for teen drivers with the rate for fatalities at 0.1% per a population of 100,000 as opposed to the national average of 0.5, which sound like we are doing something right. Licensing is based on a GDL system, that includes restrictions on night driving and having teen passengers. Parents can still do more to increase safety by not allowing teens to drive at night, to drive friends home, or to use cell phones while driving. A significant percentage of parents indicated that they do allow their teens to engage in such conduct despite the restrictions,

As for whether decals would increase safety? Perhaps a pilot program over a few years might give us an answer.

Injuries in a car accident range from minor to traumatic. You could suffer a strained neck or back that might take a few days to several months or longer to treat and heal, or sustain more serious injuries such as broken limbs, fractured pelvis, paralysis and traumatic brain injuries.

The amount of your damages and the compensation you get will depend on the nature and extent of your injuries and the ability of your Boston car accident lawyer to prove them.

Typical damages in a car accident claim include:

If you or a loved one received injuries in a car accident, you will need an experienced Boston car accident lawyer to handle your claim from start to finish. Studies show that claimants obtain substantially more compensation when represented by an attorney for a car accident than when they represent themselves.

By retaining a Boston car accident lawyer from Burns and Jain, you can be assured of quality representation. Call us today to discuss your car accident claim and how we can help: (617) 227-7423.