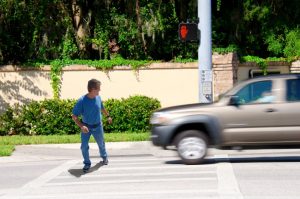 In September 2017, a horrific accident in Methuen took the life of an 11-year old girl when she was struck and killed by a hit-and-run driver while crossing at an intersection. The girl’s stepfather who was with her at the time had looked before crossing but the vehicle failed to stop and hit the young girl who was later pronounced dead at the hospital. Fortunately, diligent efforts by police who distributed news of the tragedy to the community led to the arrest of a 22-year old Lawrence man within 48-hours after someone recognized the vehicle from photos and videos that police made available. Apparently, cameras either overhanging or adjacent to the intersection, recorded the event.

When coming to an intersection and before crossing, be sure that all traffic has either passed and is a good distance away, or that it is slowing for you to pass. Never assume that a motorist has seen you. If a car has stopped, make eye contact with the motorist before you step into the roadway. Also, refrain from crossing anywhere but at an intersection, otherwise motorists will not be expecting to see you.

In 2015, 5,376 pedestrians were killed by motor vehicles and 129,000 received medical treatment for injuries for non-fatal accidents with vehicles. Getting struck by a 5000-pound passenger car even at 10 miles per hour can result in traumatic and catastrophic injuries that can permanently affect your life.

If you were injured as a pedestrian, try to remain still since movement can exacerbate internal injuries or broken bones. If the driver did stop, allow him or her to call for medical assistance. Even if you are able to talk, do not discuss the accident with the driver or anyone else at the scene until police and medics arrive.

In many pedestrian accidents with motorists, the driver will inevitably try to blame you for the accident. Common accusations are that you ran into the roadway, tried to cross on a red light, or that you were well outside the crosswalk. Police at the scene will get a statement from the driver and will ask for witnesses. You will likely be asked for a statement at the hospital if transported there, provided you are capable. Do not talk to anyone else about how the accident occurred except the police officer and your own attorney.

At many urban intersections like the one where the 11-year old girl was struck and killed in Methuen, there are cameras that may have recorded the accident. A video or photos can record the sequence of events such as your stopping at the intersection, waiting for the light to turn green in your favor, and the vehicle failing to stop. Otherwise, debris at the scene, skid marks, and witnesses can support allegations of fault by the driver.  Take your own pictures, at the time of the collision or thereafter if possible.

A traumatic event can often delay memories of the event. If you were seriously injured, the officer will wait until you are stable and able to give a statement. It is best, however, that you or your family retain a car accident lawyer as soon as possible to handle your case. Many times, the motorist’s auto insurance company will send investigators to get statements from injured victims who will say something that can minimize the liability of their insured and even point fault at them. Never talk to anyone other than the police or your attorney about the accident. Do not give statements to investigators unless they are in your attorney’s office and your pedestrian lawyer has consented to it.

If a child was injured, then getting a statement can be more delicate. Your child’s medical needs supersede all else. Let your pedestrian attorney handle all aspects of the claim.

If the driver who hit you fled the scene and has not been located, you can file a claim with your own insurer for compensation if you have uninsured motorist coverage or are living with a relative who does have it. In Massachusetts, you are entitled to PIP benefits (personal injury protection) regardless of fault. PIP coverage provides up to $8000 for medical expenses and lost wages, including household expenses. If you have medical insurance, PIP will pay the first $2000 of your medical expenses before you are required to submit further bills to your medical insurer for payment.

Compensation for additional medical expenses, lost earnings, pain and suffering and other damages must be presented in an uninsured motorist claim if you have such coverage. Your pedestrian lawyer can handle these claims against your insurer that may entail litigation, similar to if you are bringing a claim against a third party. The only difference is that there is no jury trial; only binding arbitration if you are unable to resolve the matter.

Damages in a Fatal Pedestrian Accident

Damages in a fatal accident differ from those in non-fatal injury cases. Wrongful death actions are initiated by the administrator for the decedent’s estate on behalf of the immediate family members. Damages can include:

Factors to consider in calculating damages for a child’s death are the life expectancy of the child and the amount of time the parents spent with the child, including various activities spent together.

A fatal pedestrian accident, or any other serious injury claim, should only be handled by an experienced legal practitioner. Neil Burns has been handling wrongful death cases for families for over 25 years and has successfully obtained millions of dollars in compensation. Mr. Burns handles such cases with empathy and delicacy while ensuring that your family receives all the benefits and compensation to which you are entitled.  Call his office for a free consultation: 617-227-7423.