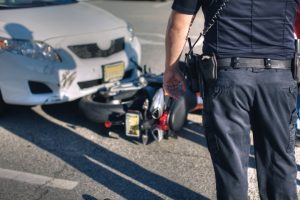 Riding a motorcycle is by its very nature a risky activity. You have little to protect yourself in an accident and can be thrown onto the pavement, into a tree, or exposed to other vehicles even in minor collisions. At any one-time, intoxicated drivers and those under the influence of illegal drugs or legal medications are on the roadway, presenting a danger to all, and most especially pedestrians and motorcycle riders.

A recent tragedy in Reading, Massachusetts, highlights the risk for motorcycle riders for being hit by a drugged driver. In this incident, a woman with a history of 2 prior DUI arrests, of numerous license suspensions for refusals to take chemical tests of her blood alcohol level, and of at least 4 previous collisions, was driving erratically on I-95 when she struck a car that spun out of control and into the path of a motorcyclist. The bike rider, a 42-year old father of 3 and a resident of Bedford, suffered fatal injuries.

According to police, the driver, who fled the scene and caused a series of other minor accidents while fleeing but who was soon apprehended, was incoherent and unable to stand and exhibited belligerent behavior to the officers. Although reports did not indicate the results of any blood tests, if taken at all, the driver’s attorney commented that she had suffered a bad reaction to back pain medication that left her in a confused state.

As every motorist knows, or should know, it is illegal to drive while under the influence of alcohol or drugs, or to drive with a blood alcohol concentration (BAC) level of 0.08%. You are also prohibited from driving if impaired by any drug, legally prescribed or not. Although a blood test may only indicate the presence of the drug, it is the user’s demeanor and observed symptoms of impairment that will indicate that the person is under the influence.

If stopped by an officer or if the driver was in an injury accident, the investigating officer who suspects drug use, may have training in performing a test called horizontal gaze nystagmus. This is a procedure where the suspect follows a pencil or finger and the officer notes certain jerky eye movements that indicate the presence of a drug.

More reliable drug indications are the driver’s driving conduct and demeanor. In the Reading case, the driver had been observed to be driving erratically, caused other accidents after the fatal one, and was incoherent and hostile to officers, all signs of drug impairment.  A blood test would have confirmed the presence of the medication in her system.

Injuries in a Motorcycle Accident

Many motorcycle accidents result in catastrophic injuries to riders. A motorist who causes an accident cannot argue that a motorcycle rider accepts such a risk and assert that the injured biker is not entitled to claim substantial damages as a consequence.

Common injuries to bikers include:

Retain an experienced motorcycle accident lawyer if you were injured in an accident caused by another motorist.

Steps to Take if Hit by a Drugged Driver

Your initial and primary focus if in an accident is your well-being and receiving immediate medical treatment. At the scene of an accident, you may be incapacitated or otherwise unable to obtain the identities of witnesses or even to recall the event. If you were injured on a highway like I-95, there are usually numerous witnesses to the accident. Surveillance cameras are often utilized on city streets so that the events leading to the accident can be videotaped. These recordings can be obtained by police or your attorney.

Retaining a motorcycle accident lawyer is imperative and should be your next step. Too often, bike riders are blamed for accidents and may be unable to recall the accident to give their version of what occurred. Your lawyer will do the following:

If a fatal accident case, the motorcycle accident lawyer will handle the wrongful death action that is filed by the administrator for the decedent’s estate on behalf of the immediate family members.

Damages in a Motorcycle Accident

In many cases, injuries in a motorcycle accident are catastrophic and the damages substantial. Typical damages include:

If a wrongful death claim, then damages may include:

Although punitive damages can certainly be applied in cases like the Redding motorcycle fatality where the driver had knowingly operated a vehicle while drugged, few defendants have the resources to pay damages over and above the insurance limits. These damages are not covered by insurance.

Motorcycles riders should always carry uninsured and underinsured coverage of at least $100,000 because so many accidents result in significant injuries.

Consult motorcycle accident lawyer Neil Burns of Boston. Whether you were hit by a drugged driver or the negligence of another driver, Neil Burns has the experience and knowledge necessary to get you the compensation you deserve.  Call us today to get started 617-227-7423.