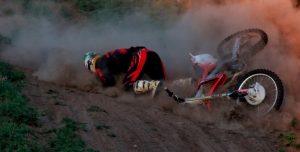 Riding a motorcycle is exhilarating. You feel the elements while zipping down the road amidst a feeling of freedom and release, totally unlike that felt in a regular passenger car. For dirt bike riders, the feeling is no less exciting. Dirt bikes are built for riding on unpaved trails or roadways, with narrower tires and nobs for greater traction. The frame on a dirt bike is lighter than a conventional motorcycle and has a suspension system designed to absorb shock on jumps and rough roads. They often have narrow seats and plastic or thin metal bodyworks to make it as light as possible. However, dirt bikes are generally not street legal, meaning they are for off-road use only.

Dirt bike accidents can result in injuries as catastrophic as those sustained on street bikes. Although you may not be riding as fast on a trail or unpaved roadway, falling off at any speed or colliding with another bike, object or vehicle can result in:

If you were injured or a loved one was killed in a dirt bike accident, who is liable and where does the compensation for an injury or fatality come from?

As an injured operator or a passenger on a dirt bike, you have possible recourse for compensation against several parties.

As an injured passenger on a dirt bike, you can seek compensation from the operator if he or she failed to use reasonable care in operating the bike. Many riders, however, are under the age of 18 and may not carry off-road vehicle insurance. If not, they may still be covered under their parents’ homeowner’s insurance.

Many dirt bike accidents occur on trails or roads specifically configured for dirt bike riding. If the track or trail was poorly designed or not maintained, then the owner may be liable, which may be a municipality or private owner. A private owner could be liable under premises liability principles. In this case, the owner may be operating a business by allowing dirt bike riders to use its trail or track for a fee. Accordingly, the owner has a duty to regularly inspect the track for hazards and to either remove them or adequately warn of its existence.

A private owner who does not charge a fee but allows riders to use its facilities also owes a very limited duty to riders. This may not require the landowner to regularly inspect and guard against unknown hazards, but it may require the owner to remove or to warn users or those invited onto the premises of the existence of known hazards. If the rider is trespassing, then the owner only has a duty to not use malicious or dangerous methods to deter those from using the land, such as setting traps.

If the owner is a municipality, state law caps compensatory damages at $100,000 per plaintiff.

If the dirt bike rider is injured by another motor vehicle where the motorist was negligent, then the driver’s auto liability policy should cover the accident. Many dirt bike accidents occur at intersections by drivers turning into the path of an approaching rider. It is of no relevance if the dirt bike rider was not licensed or was riding a bike that was not street legal so long as the motorist failed to use due care in causing the accident.

Damages in a Dirt Bike Accident

If your dirt bike lawyer is able to establish negligence on the part of the operator (if you were the passenger), or premises owner, bike manufacturer, or other motorist, then you are entitled to compensation in most cases. Your damages may include:

Dirt bike accidents can be complicated injury claims, which is why you should use the legal services of a highly experienced dirt bike lawyer. Neil Burns has been representing the interests of injured victims in dirt bike and other types of accidents throughout Massachusetts for over 30-years. Contact him today to discuss your injury claim.