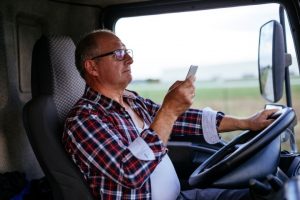 Texting is ubiquitous these days. People are doing it while driving, crossing the street, drinking coffee at Starbucks or while working. It is the latter case that can put employers at risk for liability if an employee’s negligence causes injury to a third person.

An unusual case in which an employer is being sued by a third person, or one who is not a co-worker of the negligent employee, occurred at a Wal-Mart two years ago and is being litigated now. The employee was allegedly texting on his phone while pushing a cart filled with boxes when he inadvertently ran into the plaintiff and injuring her. The victim’s complaints consisted of loss of motion of her neck and shoulders and continued post-concussive symptoms that includes short-term memory loss.

The basis of her suit is the vicarious liability of the employer or respondeat superior. This principle states that the actions of an employee while engaged in the course and scope of employment that injures a third person is also the fault of the employer. An employer who reaps the benefit of its employees must also be held liable if the worker’s conduct while engaged in a work activity harms someone else. This also allows an injured party to go after the resources of the employer who is much more likely to have the means to pay a claim so that the victim may be made whole again.

Is the Employer Always Liable?

It is not so obvious to determine when an employee is or is not engaged in an work activity. If an employee is driving a company car, then driving on a company errand or at the direction or request of a supervisor would clearly be a work activity. If the employee takes a detour, however, and becomes intoxicated at a bar before driving back to work and causes an injury accident, then the employer may not be held liable. However, if the company allows and encourages its employees to take clients out to dinner, which involves the drinking of alcohol, then the same scenario would likely hold the employer vicariously liable if that is what the employee was doing at the bar.

Regarding the texting Wal-Mart employee, the employer may have had a policy banning use of cell phones or allowed its use for business purposes only. If the latter, it should have foreseen that employees would also use it for unrelated or personal reasons. If it had such a policy either way but failed to consistently enforce it, then the employer may be held liable.

Another avenue of employer liability for the actions of an employee concerns negligent hiring. It is standard practice for most businesses to conduct background checks of potential employees and to refrain from hiring convicted felons or those whose past criminal behavior has a direct bearing on their employment. For instance, a bus company should not hire drivers who have a DUI on their driving record. If working in customer service, hiring someone with numerous assault convictions is likely negligence on the employer’s part. Not conducting a criminal background check likely exposes the employer to any injury claim made by a another person, even a co-worker, who was assaulted by the employee who had multiple violent felonies on his record.

The customer who was injured by the texting employee may also be pursuing compensation under a premises liability cause of action. This apples to businesses as well as to private property owners. While all property owners owe some degree of care to guests or visitors, businesses owe a higher duty of care. This includes inspecting the premises for known and unknown hazards on a regular basis and either repairing or eliminating the hazard or clearly warning patrons or invitees of the hazard. It also requires that the employer have had either direct or constructive notice of the hazard. If the employer was advised before the accident or had been previously aware that its employees had cell phones and were using them in violation of company policy while working, then it had notice.

In the real life case of the texting employee, the employer should at least have been aware that texting while working, especially for certain workers, posed a hazard to others since it distracts workers. Pushing a cart filled with boxes demands that the worker be on the lookout for patrons and requires a high degree of care to do so. It may not be significant if no similar accidents had occurred on the premises involving texting while working since it is common knowledge that texting is a distracting activity.

Damages in a Premises Liability Claim

Your premises liability lawyer can explain to you how and why an employer may be held liable for the conduct of its employees that led to your injury. Damages may include:

While being injured by a texting employee may not be the most typical case, there are numerous other examples of employees who failed to exercise care while working and injured another person. This may simply be an employee in a company car who failed to stop for a red light or a department store worker who carelessly left certain objects on the floor upon which you slipped and fell. In either case, you will need the services of a seasoned premises liability lawyer who can handle your claim and obtain the compensation you deserve.

Many cases against businesses are vigorously defended by very experienced defense lawyers. Allow Neil Burns to represent your interests and level the playing ground for you.