Children are often the most defenseless segment of our population when it comes to abuse or injury, whether the injury was caused by parents, relatives, nannies or other third parties. Parents who both work trust that a nanny, sitter or daycare worker will take care of their children and know how to deal with crying spells or tantrums with patience and understanding. 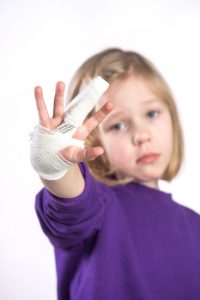 Young children are incapable of communicating how their injuries occurred or are too afraid of pointing out the person responsible for continued abuse. When a child is brought to a hospital or other facility with bruises or trauma, medical professionals have a legal obligation to ask how the injury occurred. If the caregiver alleges an accident was the cause of the child’s condition, the medical staff must investigate whether the history given is consistent with the clinical findings.

Neil Burns is a Massachusetts child injury lawyer who represents children who have been injured either by the negligence of others, such as in a car accident, or from the abusive and criminal behavior of others. We work with medical professionals to uncover the truth of how your child’s injury or condition resulted and work diligently to obtain adequate compensation for your child.

A child who is injured by the fault of others, such as by negligent driving or from a dog attack, is entitled to the same compensation as an adult. Damages may include:

These amounts are not minimized because of the child’s age. In fact, a child is more susceptible to head trauma in an accident as the child’s brain is not yet fully matured. If your child suffered a traumatic brain injury (TBI), he or she could suffer lasting consequences or have symptoms that may not manifest for a few years. A child who has a head injury may not experience reading or other cognitive difficulties until school age when delayed reading or writing skills become evident.

In brain trauma cases, our office works with medical professionals to carefully review your child’s history and the medical literature to support an opinion as to the risks such trauma presents. In a civil case, the treating specialist can assess your child’s condition and records before rendering an expert opinion that “to a reasonable medical certainty” the trauma suffered by your child will cause future cognitive deficits or has caused already caused them.

A “reasonable medical certainty” means that it is more likely than not that the trauma has or will cause certain deficits. This testimony is vital in many of these cases to getting your child the compensation that he or she deserves.

While it is true that the future cannot be forecast with absolute certainty and a child can delay in bringing a negligence cause of action until he or she is 18, waiting to see if your child develops cognitive problems years later is not advisable. Evidence and memories dissipate and fade over time and too many variables can arise that could otherwise be used as explanations for your child’s difficulties in school or social situations. In other words, the causal link between the accident and the ramifications can become too tenuous so that a medical professional may hesitate to acknowledge that link when it was more likely years earlier.

A nightmare scenario for any parent is finding out that their child is in the ER with head trauma or other injuries after having left a perfectly healthy baby with a nanny just hours earlier. Two Cambridge parents experienced this horrific situation when they found that their one-year old daughter had suffered broken bones, head bruises and brain swelling that led to her death. The coroner initially ruled the case a homicide and the matter attracted national and international attention. Just before trial, however, the assistant medical examiner suddenly changed the cause of death to “undetermined,” apparently in response to pressure from defense attorneys who offered an alternative reason for the child’s demise–an undiagnosed clotting disorder. Consequently, the prosecution felt a criminal conviction was unlikely and dropped the case.

The parents, however, sued the nanny and obtained a default judgment for $4 million against the nanny who had returned to her native Ireland. Although the judgment is uncollectable given the nanny’s scarce resources, the attorneys for the couple did obtain an order whereby any movie or book proceeds that the nanny negotiates would be used to satisfy the judgment. This is reminiscent of the O.J. Simpson case where the parents of homicide victim Ronald Goldberg sued Mr. Simpson in civil court and obtained a multi-million dollar judgment that could be satisfied by any future income that Simpson might garner.

In matters where a nanny or caregiver was obtained through an agency, the agency may be exposed to liability as well. Your child injury lawyer needs to investigate this possibility as well.

Unlike a routine car accident case, proving abuse can be difficult. It is often the collaborative efforts of law enforcement, medical and social service professionals that uncovers the truth in these matters.

Shaken baby syndrome and abusive head trauma (SBS/AHT) is a recognized medical condition that has been extensively researched. Hundreds of children die each year from SBS/AHT from caregivers who become enraged from a crying or screaming child and shake the child violently or hit or punch the child. Violent shaking, that may not leave any visible bruises or external trauma, can result in:

There are pediatric physicians in most major medical facilities, or in private practice, who are trained to identify abuse and to eliminate other causes for the child’s injuries such as metabolic disorders, viruses, infections or as in the Cambridge case, a clotting disorder.

When a case of SBS/AHT is suspected, we work with the various disciplines to uncover the cause. An analysis consists of:

Any confession or any statements from the suspect should be given freely and voluntarily without coercion or threats from law enforcement. If the person wants an attorney, then all questioning must immediately cease.

Statements from the defendant can be used against them, especially if they contain untruths or allege scenarios that are not consistent with the evidence. For example, if the person claimed the child just rolled off the bed, this may not explain the extensive injuries the child sustained.

In a civil case against the caregiver for damages, our office must often counter defense arguments that other reasonable explanations accounted for the child’s injuries. With meticulous preparation and the support of law enforcement and medical professionals, our office has been able to prove that abuse or shaken baby syndrome was the cause and have obtained reasonable compensation for our infant clients and their families.

Your child deserves a future that is promising and free of trauma. If your child was injured by the negligence or abusive behavior of another person, you need a child injury lawyer who is seasoned and skilled in knowing what challenges these cases often present and how to meet them successfully. Call Neil Burns today for a free evaluation of your injury claim.