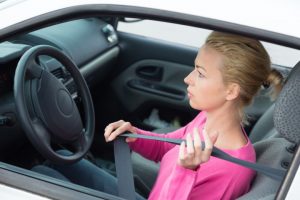 Bay state residents may be politically liberal but we are also libertarian-minded when it comes to certain issues such as wanting the government to stay out of particular social matters. However, this streak of free thinking and hands-off attitude does not translate well when it comes to seat belt use.

Massachusetts ranks third to last in the entire country when it comes to seat belt use, behind New Hampshire and South Dakota.  Amazingly, New Hampshire only requires those over 18 to buckle up.  It has been a struggle through the years to get our Commonwealth residents to use their seat belts but efforts to make non-seat belt use a primary violation have failed.  Currently, you cannot be stopped or ticketed for failing to use your seat belt unless you first are observed to have violated some other ordinance or traffic law.

The national average for seat belt use is 88.5 percent according to the National Highway Traffic Safety Administration (NHTSA).  Massachusetts is at a dismal 74.1 percent, which is actually a marked improvement from 2002 when usage was at a mere 51 percent. One problem may the secondary violation provision of the seat belt law.  According to the NHTSA, in the 34 states where failure to use a seat belt is a primary violation, the percentage of usage goes up an average of 10 percent, which would put our state more in line with the national average. It would also save 18 lives and hundreds of catastrophic injuries per year.

There is hope, however, as a bill mandating primary enforcement has made it further along in the legislative process this year than has any previous measure. Whether it ultimately passes remains to be seen. In 1986 when the measure was put to referendum it was rejected by voters.

Massachusetts has an annual “Click It or Ticket” campaign that was started in 2002.  It has increased awareness and led to at least the current level of use, which is over 20 percent higher than when the campaign began. Law enforcement and media especially reach out to 18 to 34-year old males who drive trucks and delivery vans and who apparently are less likely than others to wear seat belts. Most of the people in this group reported that their reluctance to buckle up was due to the short distances they drive.

No one really has to be reminded that seat belt use saves lives as well as prevent debilitating, permanent injuries that can substantially affect your daily life and that of your loved ones.  Still, media campaigns and primary enforcement laws seem to be the key to forcing people to take the few seconds to buckle up and save them and others a life time of regret.

Relevance of Non-Seat Belt Use in Injury Claims

In a car injury claim, the claimant or plaintiff must prove negligence on the other driver’s part.  All motorists are required to use caution or to exercise ordinary care when driving, which means obeying all traffic and speed laws. If the other motorist’s conduct, such as speeding or making an unsafe lane change led to the crash, then the driver is considered to have been negligent. As a plaintiff or claimant, you are also required to exercise ordinary care, but is your failure to wear a seat belt evidence of carelessness or negligence that can jeopardize your right to compensation?

In most states, including Massachusetts, lack of seat belt use cannot be used as evidence against you and may not be introduced at all even if an expert could testify that if you had used one, your injuries would likely have been far less serious or that a loved one may have survived the collision. However, if the issue or cause of action is product liability where the restraint system is an issue and no seat belt was used, then the fact of non-use may be introduced. In other states where such evidence is admissible, it is used to minimize damages. These are issues that your car accident lawyer can discuss with you. Still, the next time you decide to not use a seat belt, think about the risk you are taking not only yourself but to your family as well.

Car accident claims are the most prevalent of personal injury actions since millions of people are injured in accidents each year. Damages vary based on the severity of the injury, liability, your ability to work, pain and suffering and other factors. Damages in a typical car accident claim may include:

If you or a loved one were injured in a car accident, contact car accident lawyer Neil Burns of Boston. Mr. Burns can explain the seat belt laws in our state, if that is a concern, and counsel you on what to expect in your car accident claim. Mr. Burns has handled thousands of injury claims over his decades of practice and has obtained millions of dollars in compensation for his satisfied clients in all types of injury matters.  For a free consultation of your claim call us today at: 617-227-7423