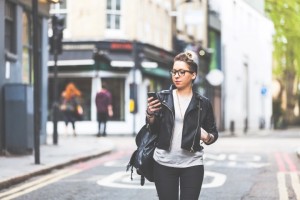 Most people who drive or who are of at least driving age have heard of distracted driving and the dangers it poses.  Although distracted driving can involve any activity that causes a motorist’s attention to focus on something other than driving such as eating, conversing, rubbernecking or changing the radio station, it is more concerned with our addiction to technology–in short, cell phones.  Accident statistics have shown that distracted driving may be at least as insidious as driving under the influence of drugs or alcohol though the penalties are far less strict.

But what about “distracted walking?” This refers to a walker but with the same behavior as a motorist who is engaged in texting, eating or talking on his phone, even if hands-free, but are the risks as substantial as those to the driver?

Actually, the dangers are as great and they are not abating any time soon.  An Ohio State University study concluded that the risk of injury of walking while distracted outpaced that of distracted driving.  In that study, researchers examined cell-phone related ER visits from the National Electronic Injury Surveillance System from 2004 to 2010 that include injuries to pedestrians, bicyclists and motorists in which an electronic device was used.  They found that nearly 70% of the injuries were suffered by people who were not texting but engaged in a conversation on their phone.  They also found that injuries from distracted walking doubled during this time.

In a University of Washington study, the researchers observed pedestrians at 20 intersections. Their findings were that almost half of the people crossing did so while distracted with the highest numbers engaged in some kind of technology activity including wearing headphones, texting and calling with some involved in multiple distracted activities. 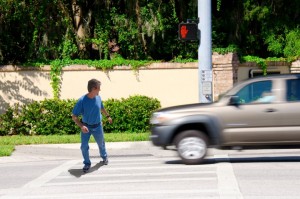 The issue with distracted walking is not that it is difficult to cross the street or intersection but that pedestrians who are distracted do so more slowly and often against the light or without looking both ways for approaching traffic.  With headphones on, they may not even be able to hear an approaching vehicle.  These people run the risk of not only being struck by cars, buses or trucks but of walking into objects or falling off bridges into ditches or bodies of water, incidents that have actually occurred.

Of course, it is not against the law to walk and text, even while crossing an intersection unless you are violating some other traffic law such as jaywalking or crossing against the light; but it can be dangerous.  So if you are distracted when struck by a car, run into a pole or fall off a bridge, you may find it difficult to find fault with anyone other than yourself.

Communities can take some steps to alleviate the problem.  Educating pedestrians can help by pointing out that serious injuries do occur from distracted walking.  They can be advised to put the cell phone down or take the headphones off when crossing an intersection and to remember to look both ways before crossing, even if you do have the light in your favor.

Signs at intersections that warn pedestrians to pay attention while crossing the street or walking on busy sidewalks can help as can schools since pedestrians under 31 represent the group that is suffering the most injuries from distracted walking, which is no surprise since many grew up with cell phone technology and are more apt to use it more often.

Contact Experienced Injury Attorney Neil Burns if You Are Injured

While insurance companies may assert the defense that you were distracted by texting or wearing headphones, an injured pedestrian still may have rights, including that of properly crossing in a crosswalk.  Call Attorney Neil Burns for a free consultation if you are injured in a pedestrian accident in Massachusetts.