Construction zones are notorious for being the scene of car accidents in Massachusetts. And if road or other construction is occurring in a stretch of road already known to locals as particularly susceptible to accidents, then that road becomes even more dangerous. This is true not only for motorists but for construction workers who must have safeguards in place to alert motorists to slow down. 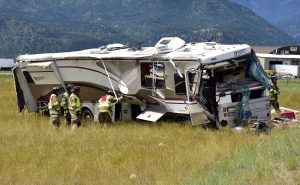 In late July of this year, an RV crashed into a utility vehicle at a construction zone on Route 20 near Bates Road in Westfield and injured a construction worker. A police officer who was on construction detail had observed an RV approaching from the east and a motorist who appeared to be driving recklessly also approaching the scene from the opposite direction. Despite the police officer’s efforts to signal the driver to slow down by waving him down while standing in the middle of the roadway, the accident occurred, nonetheless. The officer was able to evade the vehicle but a construction worker in the utility vehicle that was struck was injured. He was fortunately not in the lift on the truck when the RV collided with it or he could have suffered more serious injuries that what has been reported.

Many motor vehicle accidents occur at construction sites for various reasons. This particular stretch of roadway on Route 20 in Westfield was already familiar to residents as a magnet for speeding motorists. A study of the area revealed that there had been 13 accidents at this site in the past 5-years. For some reason, this area encourages or at least does not dissuade motorists from traveling too fast and presents an unreasonable risk of an accident.

Construction workers are particularly vulnerable to motorists. They are outside working on cranes or lifts or may be flagging motorists to slow or to direct them to another lane or roadway. In too many instances, a worker is injured by a motorist who was speeding or became confused when approaching or driving through a maze or mix of signs, barrels, barriers, and abrupt lane changes.

Liability and Compensation for Workers

A construction company has a duty to keep the construction zone safe for its workers as well as for motorists. It must comply with all federal and state regulations that may include posting signs at a certain distance from the work zone to alert approaching motorists to slow down and be aware of workers. Certain signs may need to be posted or workers situated on the roadway to flag motorists. Police are normally assigned to work zones as well.

Construction workers injured on the job are entitled to workers’ compensation benefits that can pay medical expenses and lost income to a certain amount but who are barred from suing their employers except under very rare circumstances. But if safety for the construction zone had been delegated to another party or contractor, the worker might have an injury claim against that party as a third-party claim; the “second party” would be the employer.

However, the injured worker in the Westfield accident could have a claim against the reckless driver for negligence regardless of his workers’ compensation claim.

A third-party claim against the reckless and speeding motorist, an outside contractor, and possibly the city or county can include the following damages:

Workers’ compensation would likely pay most if not all of the injured worker’s medical expenses. It does not pay for all lost income and does not provide any compensation for pain and suffering. This is why you need an experienced Massachusetts personal injury lawyer.  If an injured worker does obtain a settlement or money verdict against a third party, then the workers’ comp insurer is entitled to a credit or lien on the settlement for the amounts it paid to or on behalf of the worker. In serious accident cases, the injured worker can still obtain a sizeable settlement despite the lien.

Retain a Motor Vehicle Accident Lawyer from Burns and Jain

Many injury claims consist of issues of liability, damages, and liens on settlements that the average person is not able to understand or to handle. A motor vehicle accident lawyer from Burns and Jain has the necessary experience and knowledge to handle your claim from start to finish and negotiate a reasonable settlement for you, even if you have a separate workers’ compensation claim. Call us at (617) 227-7423 for a free consultation about your car accident injury claim.