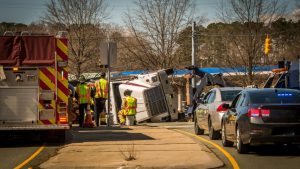 Large truck fatalities overall were up by 9%. In 2017, there were 4,761 deaths involving large truck-related accidents with 1,300 being truck drivers themselves, according to statistics from the National Highway Traffic Safety Administration (NHTSA). About 40% of the 1,300 truckers who died were not wearing seat belts. Tractor trailer trucks are vehicles that weigh over 26,000 pounds and are regulated by the Federal Motor Carrier Safety Administration.

The rise in fatal trucking accidents is surprising since many new innovations have been introduced and implemented that were designed to reduce the incidence of accidents. Newer trucks or those which have been modified now have automatic emergency braking, rear-view cameras, lane departure warning, and electronic logging systems. Current guidelines limit the number of hours that a driver and his/her truck can be in-service per day and week. There are also rest requirements before a driver can go back on the road.

Drugs and Alcohol Use

Safety advocates point to several factors that have caused the increase. With a booming economy, more trucks are the road, but drivers are still under pressure to deliver loads on time. Driving is a monotonous task, and many operators suffer medical conditions from poor diet and lack of exercise. Fatigue is a constant concern that a great number of drivers battle by taking methamphetamines, alcohol, cocaine and marijuana.

A study of truck drivers worldwide that was published in Occupational and Environmental Medicine found that American drivers had the highest rate of alcohol testing results at 12.5%. Thailand had the highest percentage of amphetamine use at 83% of all drivers in that country. The rise of opioid use among drivers is commensurate with the increase among our national population for young and old alike.

Other studies have found these common factors in tractor trailer accidents nationwide:

Anytime a tractor trailer collides with a passenger vehicle, the odds are substantial that the passenger car occupants will suffer the greatest.

Also, in many tractor trailer accidents, fault lies with the driver. Truck drivers and trucking companies are commercial carriers and are subject to many more rules and regulations than ordinary motorists and have a higher duty of care. As indicated above, they are restricted in the number of hours they can drive. Also, although motorists with regular licenses may not drive with a blood alcohol concentration level (BAC) of 0.08% or higher,  commercial drivers may not drive with a BAC of 0.04%.

If liability is an issue, an experienced truck accident lawyer can sift through the data and examine the various regulations that the truck drivers and the companies employing them must follow. In a serious or fatal accident, investigators from the state and FMCSA may investigate and find that the driver and/or company violated one or more safety rules. Your truck accident lawyer may also uncover evidence that the company was negligent in hiring the driver or failed to implement a drug testing routine. Other violations could be falsified records on hours of operation and rest, or blood tests revealing high concentrations of certain drugs or alcohol.

Your attorney could also find that the roadway where the accident occurred was defectively designed or lacked proper signage that could find the county or state liable. Defective equipment on a truck or car could expose the manufacturer to liability as well.

Trucking companies also have high insurance liability coverage that can often compensate victims to a much larger extent than from ordinary vehicle coverage. For trucks under 10,001 pounds moving non-hazardous freight, the minimum coverage is $300,000. It is $750,000 if over 10,001 pounds. If hazardous cargo is being transported, coverage must be $5 million.

Injuries from a tractor trailer accident can be catastrophic and be life altering for the victims and their families. These can include:

For a wrongful death claim, damages can include:

Complex accidents, like those involving tractor trailers, require the skills, dedication and resources of a truck accident lawyer with years of experience and success in handling such injury claims. If you or a loved one was injured or killed because of a truck driver’s negligence, call our office immediately at (617) 227-7423 today for a free consultation about your personal injury claim.