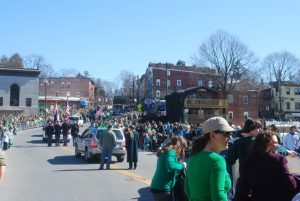 Tragedy recently struck this past July when a 2-year old was struck and killed in a car accident as a result of an unfortunate set of circumstances at the intersection of L Street and E 6th Street in Southie, Boston. The toddler was with a woman who was pushing a stroller on L Street with another toddler when a Prius and van somehow collided, forcing one of the vehicles onto the sidewalk and to strike the child. The woman was uninjured and the other toddler suffered non-life-threatening injuries. Because the accident occurred on a day and time when street cleaning was in effect, the street was free of parked cars that normally fill up that side of the street. Consequently, there was nothing to prevent the errant vehicle from hopping the sidewalk.

There was no indication as to how the collision between the two vehicles occurred. A local citizen commented that other accidents had occurred at L Street before this incident. Just a week before the accident, city officials had discussed traffic safety at the L Street Beach House where L Street was one of the topics discussed.

Southie is one of the more fascinating neighborhoods in Boston with it dense population, large Irish population, and rich colonial history. Though this neighborhood has a reputation for toughness, it has been evolving with new housing, organic restaurants, and parks.

There are about 111,000 car accidents in Massachusetts yearly with 4,700 injuries and 360 fatalities. The main factors involved include:

All motorists are under a legal duty to exercise reasonable care when operating a motor vehicle, which means obeying the traffic laws, not speeding or driving recklessly, keeping focused on driving, and otherwise keeping a lookout for road hazards.

In the Southie accident, one or both motorists may have been at fault and the cause of the toddler’s death. Regardless of the fact that the fatality could have been avoided if cars had been parked as usual on L Street, it was entirely foreseeable that a vehicle could have jumped onto the sidewalk if in a accident on  a day and time where there were no parked cars.

Although the family of the toddler would likely have a cause of action for wrongful death against one or both of the vehicles, depending on the mechanics of the accident, there was some indication that the area on L Street where the accident occurred may be a particularly dangerous stretch of roadway. Again, it depends on how the accident occurred and whether an alternative and safer design, signage, or traffic control device at or near the accident site could have prevented this accident.

In the Southie fatal car accident, the administrator for the estate of the deceased child can bring a wrongful death claim on behalf of the surviving parents. Damages for a minor can include:

In the case of a decedent who was of a very young age, it can be more difficult to ascertain damages, especially financial. A forensic economist and vocational experts are generally retained to help determine damages in wrongful death claims involving minors.

In wrongful death claims, it is essential that you retain a car accident lawyer who has the requisite experience, knowledge, skills, and resources to handle your claim and to give you the best opportunity to obtain the most compensation available. The Law Office of Burns and Jain have the attorneys you need to handle complex cases of liability and damages, such as claims involving minor children. Call our office today at (617) 227-7423 for a consultation about how we can help you and your family.