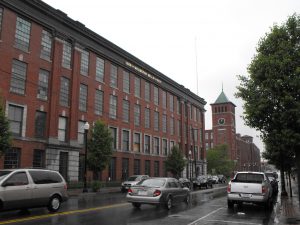 Strange things happen at night. In the early morning hours of April 8, 2018, in Lawrence, customers at the Lowell Street 7-11 got a very rude wake-up call when an intoxicated man drove his SUV into the store, just narrowly missing a customer but striking a 64-year-old man, causing him extensive injuries. A video from the store captured the sequence, showing customers talking near the entrance way just before the SUV comes crashing through.

The driver is also seen on the video pleading with police before being taken away and jailed on suspicion of intoxicated driving, driving without a license and reckless driving. Because the victim suffered a serious injury, the driver could face more serious DUI charges.

In such cases, what recourse does an injured victim have? Because the responsible driver was driving without a license, chances are that he was uninsured. The injured victim will undoubtedly have substantial medical expenses and if working, will miss considerable time from work. And, of course, he will have damages for his pain and suffering.

In the Lawrence 7-11 accident, the victim can seek damages from the driver if insured. Liability is obvious since driving under the influence is against the law and no driver exercising ordinary care would drive his car through a store front. The claimant can collect PIP benefits under the driver’s auto policy for up to $8000 for his economic losses such as medical expenses and lost earnings. If the claimant had health insurance, then PIP generally pays for the first $2000. PIP also pays 75% of the claimant’s wages up to the applicable PIP limits.

If the driver was uninsured, then the victim may seek compensation under the uninsured provision of his own auto policy if he, or someone in his household, had one. In this situation, his own insurer will act as an adversary and will require that he prove all elements of negligence including the nature and extent of his injuries. But what if the driver was uninsured and the injured claimant had no vehicle?

Because the driver was intoxicated, there may be dram shop liability. Your car accident lawyer can investigate whether the man was drinking at a bar or restaurant before driving. If so, then your lawyer must show that the vendor or establishment was aware that the man was intoxicated but continued to serve him anyway. Businesses and their employees who serve customers have a duty to monitor the behavior of its customers and to refuse service if someone becomes visibly intoxicated. This can be shown by interviewing the bartenders or other patrons at the bar. Also, if the driver was highly intoxicated and showed obvious signs of impairment and had left the bar just minutes earlier, this could establish that the driver had continued to be served despite his intoxicated state and then allowed to drive. Receipts from the bar can also establish what and how much he drank and at what time.

Businesses are often highly advised to train its staff to recognize signs of intoxication such as slurred speech, aggressive or other annoying behavior, loss of coordination or slowed reaction time. If not, then this could be a factor in imposing liability.

However, if the Lawrence driver had been drinking at a friend’s house, then that individual may face civil liability for injuries to the claimant under Massachusetts law. By allowing the claimant to drink and become intoxicated at his home and then allowing him to drive, the social host becomes liable for damages caused to any person the intoxicated driver injures. The social host’s homeowner’s insurance policy could be the source of compensation for the victim.

Is the Store Liable?

At first glance, the store could not possibly be at fault in this accident. But what if this was not the first time such an accident had occurred? The issue is whether the store owner had a duty to protect its customers from cars crashing through its entrance.

Surprisingly, courts around the country have issued rulings on similar cases. Although a business owner has a duty to provide safe premises for business invitees, that duty does not extend to where the foreseeability of harmful consequences is slight. An owner is not an absolute insurer against harm on his property and need only exercise the degree of care of a reasonably prudent store owner.

Since the probability of a reckless act of driving into the store is very slight, then the burden of taking protective action would be too great a burden. However, if the store had experienced several such incidents in the past few years, then the foreseeability factor is heightened and a court might impose liability if the store owner was aware that such incidents were occurring and failed to take reasonable steps to prevent future incidents.

A car accident can result in serious injuries. Damages in such cases vary depending on the nature and extent of your injuries or the seriousness of your injury, if it caused a permanent disability, the effect it has had on your life, and the possibility of future treatment.

In many cases, a party’s liability may be obvious, but there are often other persons or entities that may have contributed to the accident that only an experienced car accident lawyer can uncover and offer evidence of their liability. Many of these parties are able to contribute to your damages claim so that you can be reasonably compensated for your injuries. Call the car accident lawyers at Burns and Jain at (617) 227-7423 to discuss your accident claim.