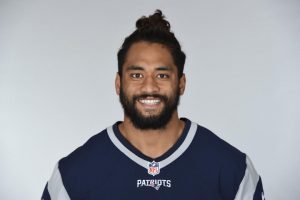 In mid-October, New England Patriots defensive end and linebacker Harvey Langi and his wife were injured when their vehicle was rear-ended while stopped for a traffic light, in Foxboro, Massachusetts. Langi’s wife suffered broken ribs and fractures to both her hips. Langi reportedly sustained neck, back and head injuries in the collision. Langi was placed on the non-football injury list and his return to the team this season is questionable. He is a non-drafted rookie having played football at the University of Utah before beginning his two-year mission for the Church of Latter Day Saints. He had resumed his college career at BYU before being picked up by the Patriots for the 2017 season. He has only played one game thus far in his NFL career.

Despite Langi’s absence, our Patriots are rolling behind the arm of the ageless Tom Brady. But our concerns are still with the Mr. Langi and his wife and we fully expect them both to fully recover.

Rear-end auto accidents may be the most common type of car accidents. Most occur at traffic-controlled intersections like the one where Harvey Langi and his wife were injured. Others occur at stop signs and on the freeway where vehicles may suddenly slow for a hazard or traffic and are struck from behind by cars that are going too fast and traveling too close behind them.

Liability in a rear-end accident is nearly always that of the driver who rear-ended you. Motorists are required to keep a safe distance behind the auto in front of them, which usually means a distance of at least two seconds. On a freeway or in traffic, there is little excuse for a motorist to not keep a safe distance so as to have enough time to slow and stop should circumstances require it. At a stop sign or traffic light, there is no justification at all for not stopping unless your brakes suddenly fail. If the responsible driver claims that your brake lights failed to work or that you suddenly backed up, few adjusters or juries will accept that without more evidence.

The driver who rear ended Mr. Langi was drinking and taking illegal prescription drugs.  The police officer who was at the scene would be able to testify as to what he found.  This would help regarding liability.

Injuries in a Rear-End Accident

Most injuries in rear-end accidents are of the whip-lash or soft-tissue variety. The rear-end collision that has sidelined Harvey Langi appears to be of that type, although his wife sustained a number of fractures. This suggests that the force of the collision was severe.

In a whip-lash situation at the moment of impact, your head is slung backwards before being violently whipped forward and then back again. This results in a tearing of the tendons, ligaments and muscles of your neck since the action of your neck stretches beyond its normal range of motion. The forward bending of the neck will cause a loss of the normal lordotic curve of your cervical spine that can be viewed by X-ray.

Some medical experts have opined that your resulting neck pain may be caused by the strain to the capsule of the facet joint, located at the back of your spinal column at every level, or by the pulling away of the vertebra from the next one. If you were turning your head at the moment of impact, such as in talking to the person beside you,  the damage may be worse because of the extra degree of stretch on the ligaments.

Although it may be counter-intuitive, the speed of a car that rear-ends another is not necessarily a major factor in causing injury. Many studies have confirmed that serious soft-tissue injuries occur at relatively slow speeds and is not determinative of the severity of the injury.

Symptoms may occur immediately or take several days to appear. Some victims delay any kind of treatment until new symptoms appear or their original ones worsen. Insurance adjusters who handle injury claims are often skeptical when claimants fail to seek immediate treatment or wait until they have retained car accident lawyers to handle their claims.

Skepticism of soft-tissue claims is further compounded by the fact that X-rays do not show evidence of ligament tears and stretching although an MRI or CT Scan may show inflammation.

Your medical provider can provide credible proof of your injury by conducting neurological and other tests. Swelling often occurs and is easily observed. Your symptoms and how you respond to certain tests can also confirm your injuries.

Treatments vary and may consist of icing your neck and back with periods of rest and use of painkillers. A neck brace or collar provides support. Massage and chiropractic care are often sought along with ultrasound. Time usually heals these injuries but it is not uncommon for some persons to suffer symptoms for several months or ever years.

Unless you are an NFL linebacker or suffered fractures in the accident, many claimants will have a difficult time with their injury claims in obtaining the compensation their injuries deserve. In any case, injured victims will need a Massachusetts rear-end accident lawyer to represent them.

Car accident lawyers will obtain documentation to support your claim such as the traffic accident report to confirm liability along with witness statements, and photographs of the damage to the vehicles. The nature and extent of your injuries can be proven by medical records and reports and complemented by witness statements, medical reports and employment records that indicate your or inability to engage in your usual work duties for a time or even permanently if your injuries were particularly severe.

Experienced rear-end accident lawyers can provide studies or solicit testimony from experts if needed in low speed accidents to show that severe injuries are not unusual in such circumstances. They can also prompt medical providers to provide detailed reports indicating that your accident did indeed cause your symptoms. They will also confirm that your treatments were necessary or that future treatment is reasonably necessary.

Damages in car accidents are both economic and non-economic. They may include: