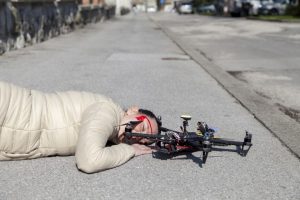 Just when you thought it was safe to go outside, here come the drones! Drones are not just for the U.S. military to target foreign terrorists anymore. They are being tested for use by Amazon to deliver packages, by real estate agents to take aerial photos of homes, by search and rescue crews to quickly and more extensively look for lost individuals, for media coverage, and by others to enable them to view otherwise inaccessible areas for safety or other reasons. But these are also the newest toys in town, especially for amateur aviators, and can be purchased by nearly anyone from $50 to thousands of dollars for more sophisticated users. Drones have the ability to fly at altitudes well over 400 feet and can approach speeds of 140 miles per hour.

Some people who purchase drones may race them in organized competitions but many users simply fly them often at altitudes of hundreds of feet for recreation or may attach cameras to them to take unique photographs for weddings or for their own appreciation. However, product defect and human error can cause these devices to collide with commercial and other aircraft and lead to serious injuries, or they can malfunction and fall and endanger those on the ground. When injuries do occur, contact an experienced Massachusetts drone accident lawyer.

There have been a number of near-misses with aircraft by drones. Recently, a helicopter operated by Massachusetts State Police came within a hundred feet of a small drone while flying over the Lawrence Municipal Airport. Fortunately, the pilot was able to quickly evade the drone or it would have struck the windshield and possibly led to a catastrophic accident.

The near collision occurred at an elevation of 600 feet. Drones are prohibited from flying over 400 feet and cannot be flown within 5 miles of an airport, which put the user in violation of FAA rules. Further, any drone that is heavier than 55 pounds must be registered with the FAA. The pilots estimated the offending Lawrence, Massachusetts drone was about 2 to 3 feet in length. After the near-miss, the drone quickly descended. Its operator has not been found.

Other incidents have included a drone flying into the face of a wedding photographer and severing the tip of his nose. A drone flying over a grandstand at the Virginia Motorsports Park a few years ago crashed into the stands, injuring a number of individuals. Drug smugglers are apparently using the technology to evade detection. In January of 2015, DEA agents discovered a downed drone at the Mexico- U.S. border that was carrying 6 pounds of methamphetamine.

Negligent use of drones is not uncommon. An analysis of drones implicated in encounters with commercial aircraft or which were determined to be violating FAA regulations was conducted by researchers at Bard College. The study reviewed 921 recorded incidents over a 2-year period and found that over 90% of these incidents occurred above 400 feet and that over 50% of them were within 5 miles of an airport.

One drone actually collided with a Canadian commercial twin-engine prop aircraft in October of 2017. The drone struck the airplane at 1,500 feet. Although it only caused minor damage, Canadian officials said the encounter could have been much worse. Canadian law prohibits drones flying within 5.6 miles of an airport and limits their altitude to 300 feet. A violation can result in a fine of $25,000.

As you can see, drones are manually operated and can easily fall from heights of several hundred feet because of operator error, weather conditions, or a malfunction in the device or can collide with other aircraft. Drones have whirling blades and since they can travel at speeds of over 100 mph, a collision can lead to tragic consequences.

You have recourse against a number of parties if you suffered an injury from a drone. These include:

Establishing liability in some cases can be difficult. It is essential in these cases to retain a drone accident lawyer who has experience in drone accident claims.

Damages for a Drone Accident

You can pursue compensation from a drone operator under that person’s homeowner’s insurance. Of course, designers, manufacturers, and distributors are generally either self-insured or have adequate resources.

Damages in an injury accident may include:

Call the Law Office of Burns and Jain at 617-227-7423 if you or a loved one was injured in a Massachusetts drone accident. You can find a Massachusetts personal injury accident lawyer at our offices who can properly advise and represent you in these matters.